During the Catholic Easter holidays, I went to Romania for a one week visit. Initially the plan was that my parents would come and visit me, but I had more days off, so I ended up coming to my homeland.

After having been in Switzer­land for 7 months now, I started to notice several things, some of which were a bit saddening. They suggest that some of the problems in Romania are deeply ingrained in our culture and at least based on the small sample of people contained in my friend bubble, it won't change anytime soon.

(Before I tell all kinds of bad things about Romania, let me just tell you that Wizzair in Basel doesn't accept mobile boarding passes. You have to print them out. How/why they accept them in Cluj, but not in Basel, beats me. And I discovered this at 11 PM the night before my 7AM flight was scheduled. Thanks Vlad for helping me out with this!)

While going to the airport, I discovered another programmer from Cluj who was also going there, so I had someone to talk with during the flight. When we arrive in Cluj, the fun begins. First, the baggage carousel breaks. This is not something unexpected. It happened to me when I was in America and I understand that it is hard to design something that will work with every possible kind of com­bi­na­tion of bag shapes, sizes and weights. Things will get stuck, I understand that. But in other places, right away somebody showed up and made an effort to get the belt moving again, climbed up on the belt, pulled off the luggage until it was empty and so on. Here? A guy with the airport uniform showed up, didn't even stop the external belt, moved two luggage, the inner belt still didn't start, so he reported on the radio and moved away, although there were still at least three baggages right at the top. And then we wait. And wait. I think it took about 10 minutes to get it solved. I don't know, maybe there was indeed nothing that the guy could do to fix it and get it moving from there, maybe there was something stuck deep inside the machinery. But couldn't he at least have cleared all the baggages that were within reaching distance and stopped the external belt? I feel like this is part of the Romanian mentality of "Las' că merge și așa" (Let it be, 'cuz it'll work like this too).

My dad has the theory that this way of thinking came to be during the long period of time when there was a lot of in­sta­bil­i­ty in Romania, because of other nations invading/raiding, such as the Ottoman Empire. During that time period, it wasn't really worth it to build up a nice home, to take care of the village, to spend effort on anything long-term, because almost every other year, the big guy in charge would stop paying taxes and the ottomans would then come and raid and pilfer everything to get back their due. And of course, they would destroy everything in their path. And because of this, people started trying to survive only until tomorrow, and if their hut/house protected them that day from rain, or if what they did on the fields got them enough food for that week, it was good enough, because maybe in one month the Turkish army would come and take away everything else. But times have changed and we don't live in that world anymore. Now it is worth investing into long-term projects and polishing what we have so that it's not just "good enough", but it works great and looks great, while we're at it.

The second fun thing at the airport was that while I was waiting for my backpack, two customs officers were walking by, I think they were switching posts or something like that, and of them tells the other (quite loudly) "Du-te numa' că îi gata băgată parola" (Go, the password is already entered). Why bother with security, why bother im­ple­ment­ing all kinds of hard cryp­to­graph­ic algorithms, when in the end the human elements says "The password is already entered"? Because who would care to hack us?

After meeting with two friends in Cluj, I arrive home to my parents, in Marghita. But I was not expected only by them, but also by a new main road. Good news: they finally repaved it. Bad news: of course they didn't finish it completely, for a good 500 metres the road having 0 surface markings. That wouldn't be so bad by itself, if they hadn't moved the pedestrian crossings at the same time. These are now indicated only by a couple of subtle road signs, but no paint on the road. It is such an adventure to cross the road, because I'm sure most of the drivers don't notice the new signs (I know that a lot of people were caught when they made the street next to my parents' flat one-way), so they totally don't expect somebody to step on to the road in front of them.

I understand that road repairs take a lot of time and it is com­pli­cat­ed, but take for example the road from Zurich to Adliswil. It has been in repair pretty much since I arrived here (it's about 7 km), but the part they are repairing is clearly separated and the rest has very nice temporary road paint.

Update from home During the last week, they finally painted the roads and didn't leave them like that for the Orthodox Easter too. Woohoo.

Intermezzo On Saturday I went to the Aquapark in Debrecen with some friends. I made the sad ob­ser­va­tion that I am getting old. Several years ago I went with one of the same friends to the Aquapark in Ha­j­dus­zo­bos­z­lo and then we just wouldn't stop running to the top of the slides, for about 5 hours. Now? Half the time was spent relaxing in a Jacuzzi. Boy, was it good. :D

The last complaint is about food. Even though there is quite a lot of fresh produce in Romania, people here don't eat healthily. There are many people com­plain­ing and making memes about how much they overeat for the holidays. This probably happens in other places too, but in Romania there is too much meat in everything. And most people of course like fatty meat. During the last month I tried to start eating more healthily, and this included having a salad (before the pizza slice) and I discovered that you can make some pretty tasty com­bi­na­tions, especially if you have a good dressing. I tried to replicate that in Romania, but I didn't find any precut salad mix (yeah, I'm lazy, I know) and of course no nice dressing. Yes, I know I was in a small town and probably in Cluj I could have found it, but this just shows that in Romanian mentality this is just a side dish at best. And this will be hurting people, because it has a huge impact on their health. As life expectancy will go up, more and more people will start having all kinds of problems because they don't pay attention to what they eat. Maybe 100 years ago it was ok to consider meat as being the only good food, because it was scarce, but at least it provided the energy to work the fields or in factories, but now, it's not like that anymore. Some younger people are starting to see this, but when they go to relatives for holidays, they still have to get stuffed.

I know it looks like criticism, but I don't want to look like I don't care about my country anymore, just because I've been abroad for a couple of months and I've seen better things. All this stuff is actually en­cour­ag­ing me to look for ways to change society for the better there. For now, I don't really know how to do it from 1200 km away, but if/when I come back I want to push for more things to be done better, starting with what I do. What I can do is to show my mom awesome recipes I learn while here :D

Now, let's move on to the nicer things. First and foremost are all the friends I met with, whom it was very nice to see. And I'm really sorry that I didn't get to meet some others :(

Next: Cluj is starting to get some really nice Cafés. I've been to several, but two stand out in particular: one is Cafe Mozart, which is older, but I didn't visit it until now. It is themed after Mozart (d'uh) and it has some amazing cakes. The other one is Joben Bistro, which is a steampunk themed bistro. It looks very cool and they have amazing Oreo Hot Chocolate. Both are worth visiting if you go to Cluj. 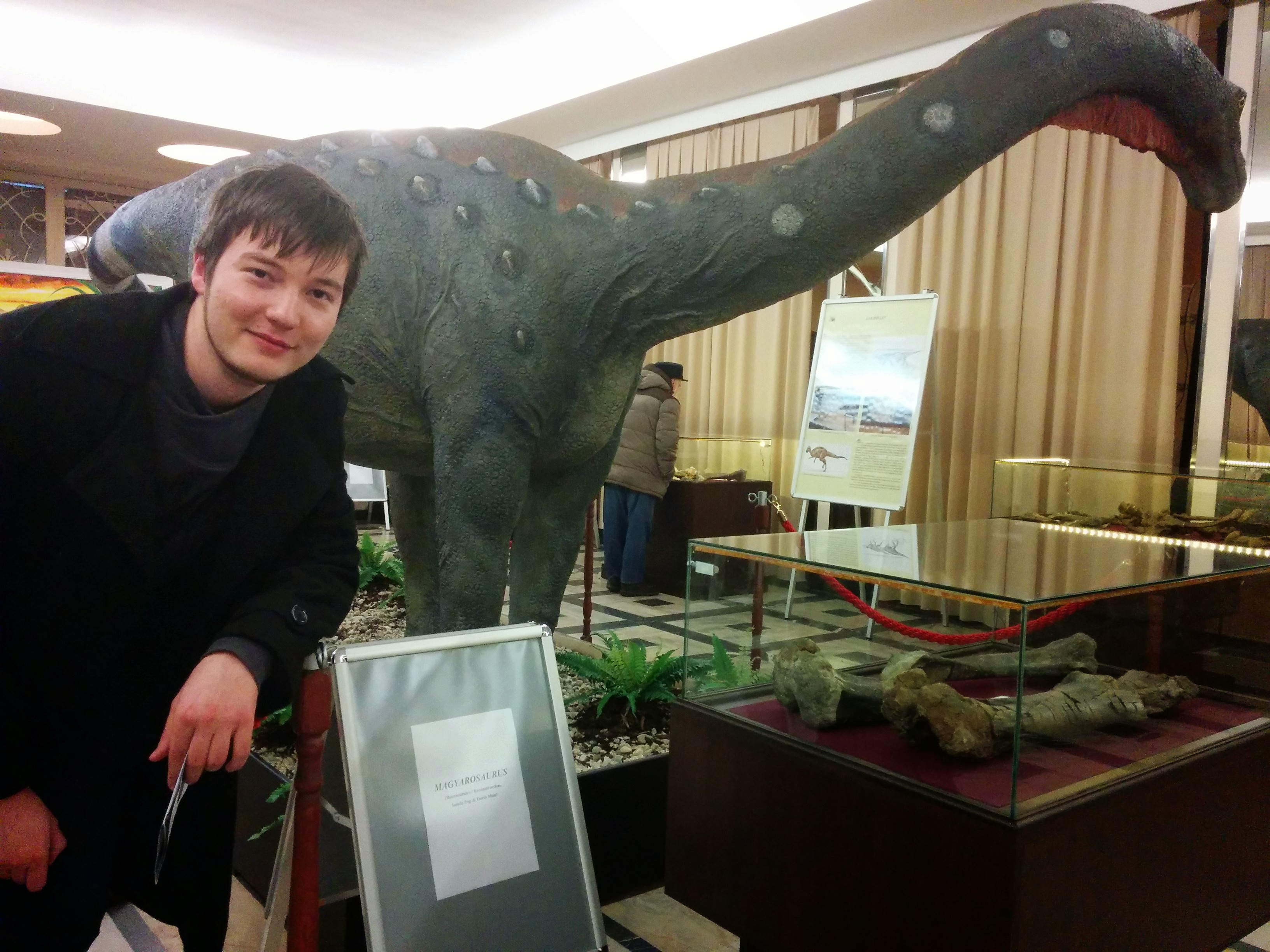 And the last cool thing: the Tran­syl­van­ian dinosaur exposition. Based on some bones they found, the re­searchers from UBB created, with lots of imag­i­na­tion, full sized models of 3 dinosaurs and 1 bird from... a long time ago. It's a quite small exposition, but I like the initiative and I hope that many other science-based events will show up in Cluj. And of course, they have a dinosaur called Mag­yarosaurus :D:D:D:D:D:D.

Oh, and it was really, really nice to be able to walk on the streets and understand what people are talking around me and what is written on the signs :)))) Although my German is slowly getting better :D

This concludes my report of the short trip I made. If all goes as planned, my next report will be about some mountains in Romania :D (but only in about 4 months)