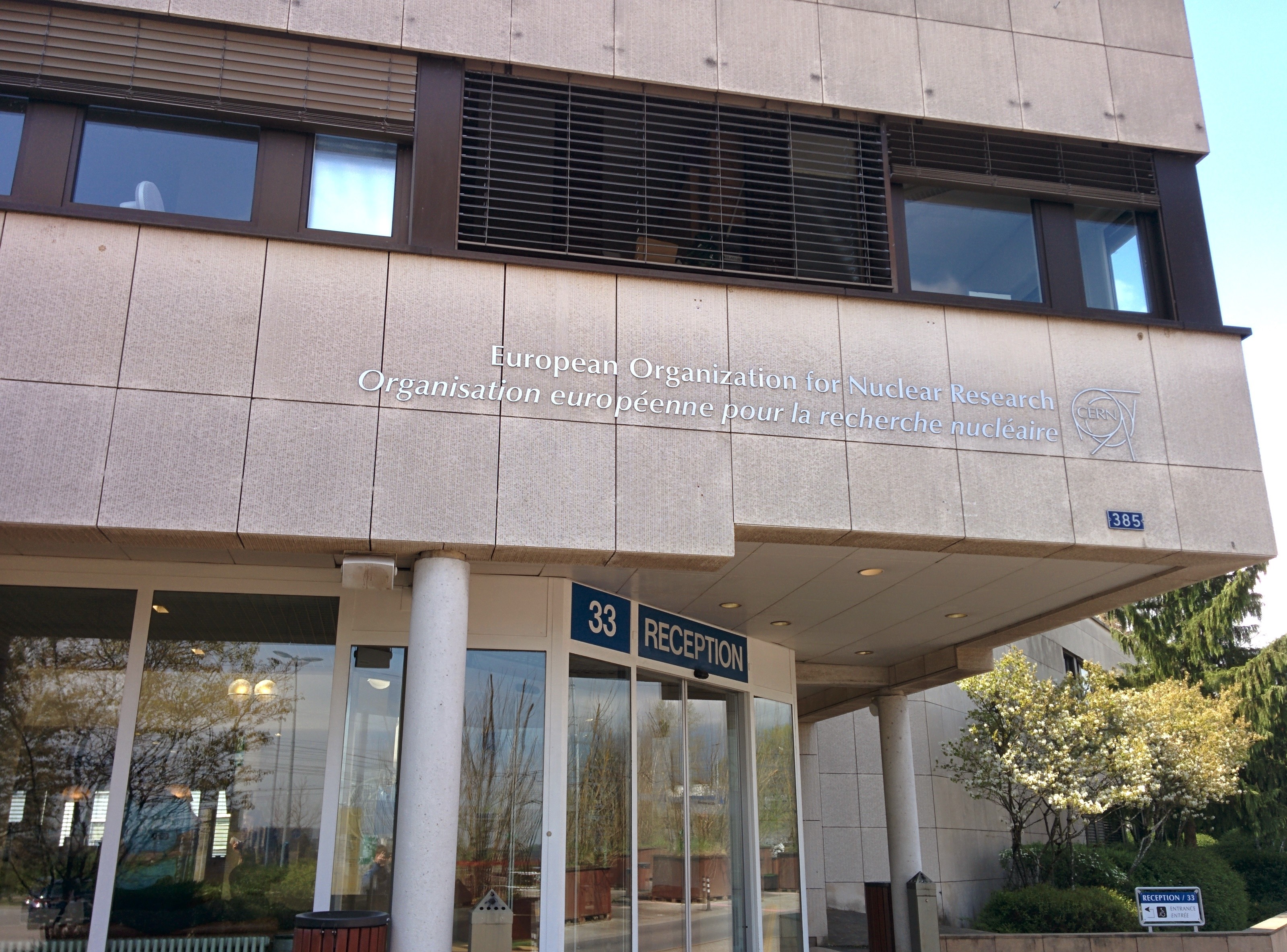 Last weekend I went to Geneva, to visit Ciprian, a friend who is doing an internship at CERN. He also happens to be a frequent reader of my blog :D.

Before joining the computer science side, I was a wannabe physicist. I went to lots of physics com­pe­ti­tions (and had some good results) and I even applied to the physics department at UBB. But in 12th grade I discovered that pro­gram­ming is also quite fun, and it has a greater payoff, so I decided to go study that. I don't regret this decision, but I still fondly remember the things that I learned from my awesome physics teachers and when I have a chance to solve a physics problem, it still gives me thrills.

So I was super excited to go visit CERN, home of the largest physics experiment in the world, the Large Hadron Collider. And it didn't dissapoint. The sheer scale of the things they are doing there is over­whelm­ing, from the coldest place in the Solar System, to the hottest place in the universe, to the highest degree of vacuum in the Milky Way, it's all here. It's a remarkable feat of extremely reliable en­gi­neer­ing (don't forget, my job title is Site Re­li­a­bil­i­ty Engineer, so I've recently gained an ap­pre­ci­a­tion for large systems that work reliably :D). 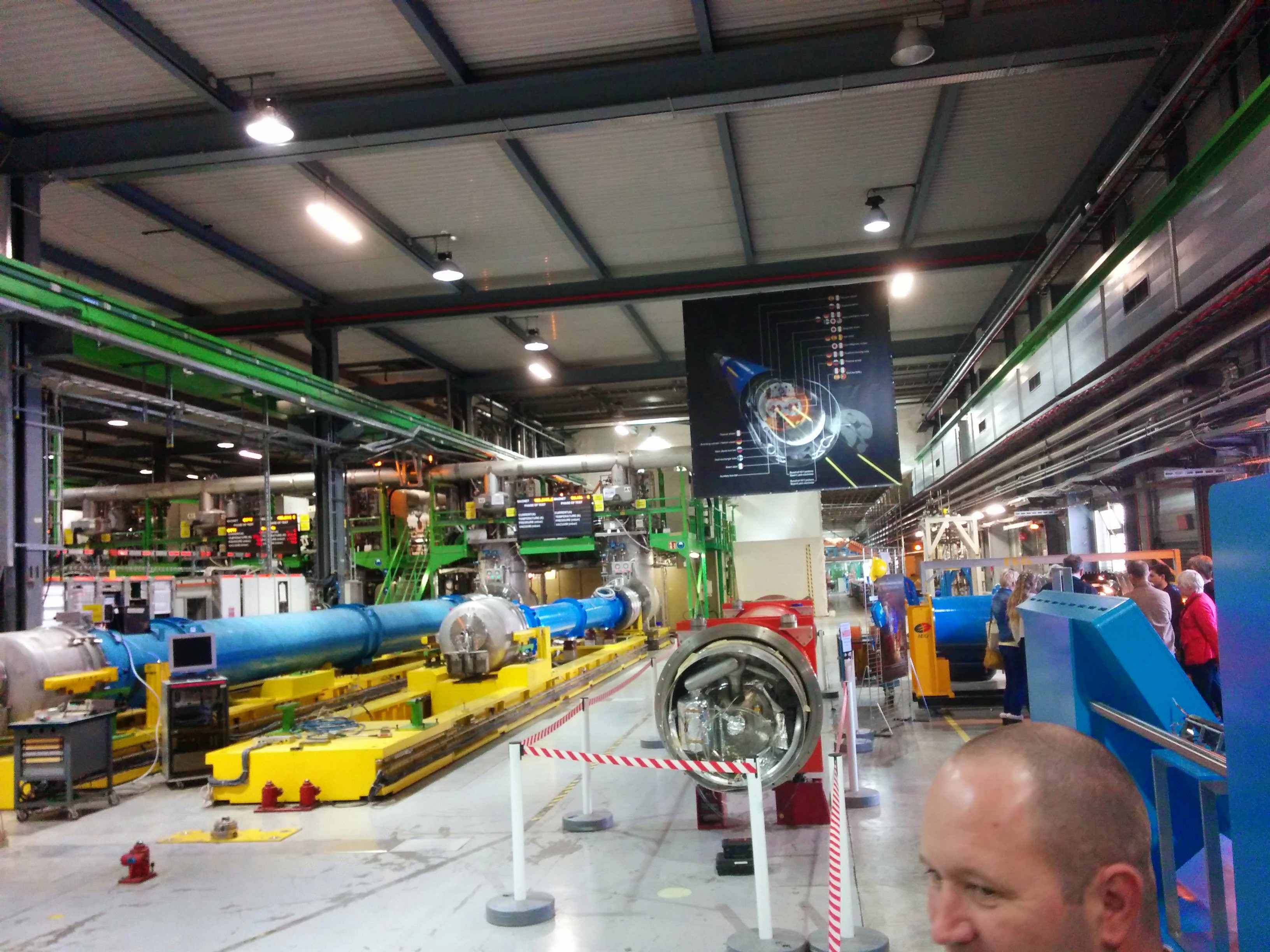 The tour started at 2PM. I was in a group with students from several high­schools, and some other in­di­vid­u­als. The guide took us to an auditorium where he gave us a short pre­sen­ta­tion about the history of CERN and some of its major ac­com­plish­ments. Then we went over to the French side to SM-18, one of the testing facilities for the su­per­con­duct­ing magnets. Here the fun facts began.

In order to be able to steer the protons flying around at 99.999991% of the speed of light, they have to use very strong magnets, generating a field of 8.4 Teslas (which is 100000 times more powerful than Earth's magnetic field). But fer­ro­mag­nets are not strong enough, so they have to use electro-magnets. But generating 8T of magnetic fields requires 11000 A (yes, eleven thousand) of current flowing through the wires. That is an insane amount of current and would generate an enormous energy loss because of electric resistance. So they have to use su­per­con­duct­ing materials. But all of the su­per­con­duct­ing materials known today operate only when cooled down way below 0 Celsius, so the magnets need to be cooled down. They use niobium-titanium for the wire, which needs to be cooled down to 4 Kelvin to become su­per­con­duct­ing. This material was chosen because of other physical properties such as elasticity. In order to keep everything so cold, they use liquid hydrogen. But nature sometimes likes to play games and oc­ca­sion­al­ly, on very small portions, the su­per­con­duct­ing wires lose their su­per­con­duc­tiv­i­ty and they start heating up right away, which would turn the helium into a gas, increase the pressure and make an explosion. So, they choose to cool the helium down to 1.9 Kelvin (colder then outer space), so that it becomes a superfluid. In this state, a liquid has zero viscosity, it "climbs" walls, so it fills all the available nooks and crannies, and it also becomes an excellent heat conductor (actually it does convection). This means that even if a small piece of wire starts heating up, the sur­round­ing helium will transport away all the excess heat and keep things safe. Because there are two beams, which travel in opposite directions, they need two magnetic fields, oriented dif­fer­ent­ly. Because 2x8 T magnetic fields would interact very strongly, the two beams have to be encased in a thick steel shielding. This also has the advantage of being Fer­ri­mag­net­ic, so that there is no magnetic field outside of the steel casing.1 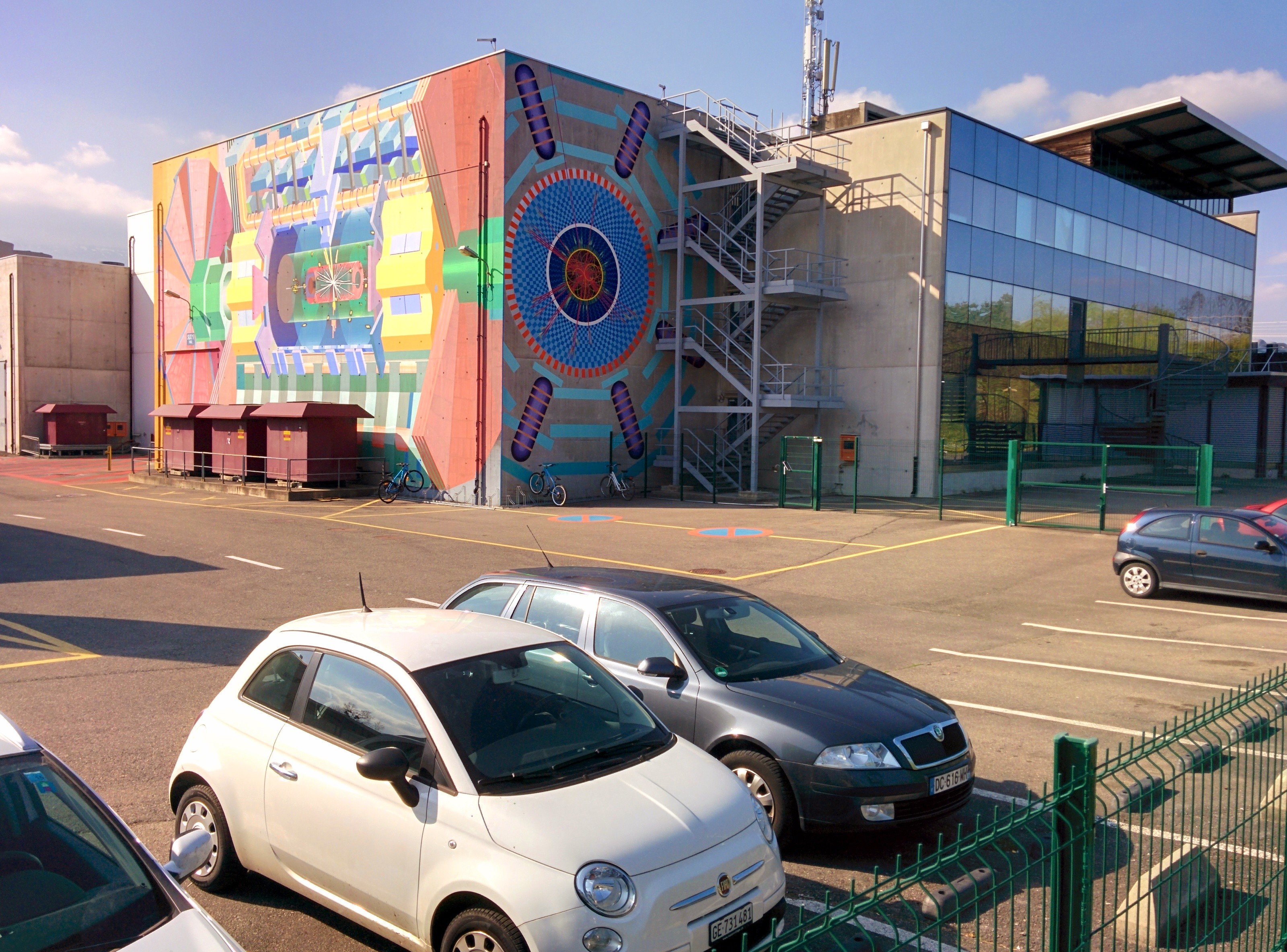 After this we went to the ATLAS experiment and we saw the control rooms, where the operators are over­look­ing everything. When the machine is running, there is always someone on-call. But many decisions have to be made much faster than a human can, so they have lots of automated systems keeping things under control.

Then we had a short 3D video (made by post­pro­cess­ing 2D footage :( ) presenting the operation of the LHC. The protons are extracted in Linac 2, a linear ac­cel­er­a­tor. At one end, a bottle of hydrogen gas feeds atoms into it, while an electric field strips off the electrons. When they reach the other end of Linac 2, the protons have an energy of 50 MeV and have gained 5% in mass. From here they go into the Proton Synchroton Booster, where they go up to 1.4 GeV in energy. The particles are then injected into the Proton Synchroton (without booster), which is the first ac­cel­er­a­tor built at CERN, having first worked in 1959. It has a cir­cum­fer­ence of 628 metres, has been improved and upgraded many times over the years, and now it can accelerate particles up to 25 GeV. The next in this long chain of ac­cel­er­a­tors is the Super Proton Synchroton (start to see a pattern?), which has a cir­cum­fer­ence of 7 km, and it brings up protons to 450 GeV. And from here we finally arrive to the Large Hadron Collider (sorry, no pattern here), a 27 km long ring, where particles are ac­cel­er­at­ed to 4 TeV into two directions and then they collide, having a total collision energy of 8 TeV. Protons travel together in 30 cm long bunches, that contain 10^11 particles, so the total energy of a bunch is about 133 kilo Joules, which is about a tenth of the energy of a car going on the highway at 130 km/h, but con­cen­trat­ed in a much smaller space, of 0.2 mm. The total energy of a beam, which has 2808 bunches in it, is equivalent to a 400 tonne TGV travelling at 150 km/h and is enough to melt 500 kg of copper. When the protons are prepared for collisions, the beam is actually focused to 16 microns.

When the two beams travelling in opposite directions collide, many new particles are created. I really like the analogy given by the guide: it's like taking a hammer to a watch. If you hit it lightly, the glass will crack and you will get small pieces of glass. If you hit it harder, you will get more of the insides. If you hit it really hard, you will decompose the watch to all of it's mechanical pieces. By colliding protons, we sometimes get some really rare particles, some of which are not seen anymore in the Universe and they are speculated to have been around at the Big Bang. This will hopefully lead us to understand better how gravity and quantum mechanics fit together, why is there more matter then antimatter (even though whenever we create antimatter, we create the same amount of matter too), and, as most scientists hope, it will lead to something completely unexpected, which will turn our theories on their head and open up completely new fields.

The collisions are recorded with what is basically a fancy-shmancy camera, one with 100MPs and that can take 40 million images per second. It has three parts, which all have different resolution and can track different particles (here they were starting to lose me in the pre­sen­ta­tion). The really cool thing is that when the particles start colliding, they generate 1 Petabyte of in­for­ma­tion per second. This is way too much to be stored, so they filter out all the know events, or any that don't seem "in­ter­est­ing" with FPGAs and ASICs that are located close to the experiment sites, so that only 1 out of 10000 events is sent to the server farm, where some more advanced algorithms filter out so that only 1% is actually stored and then analyzed. 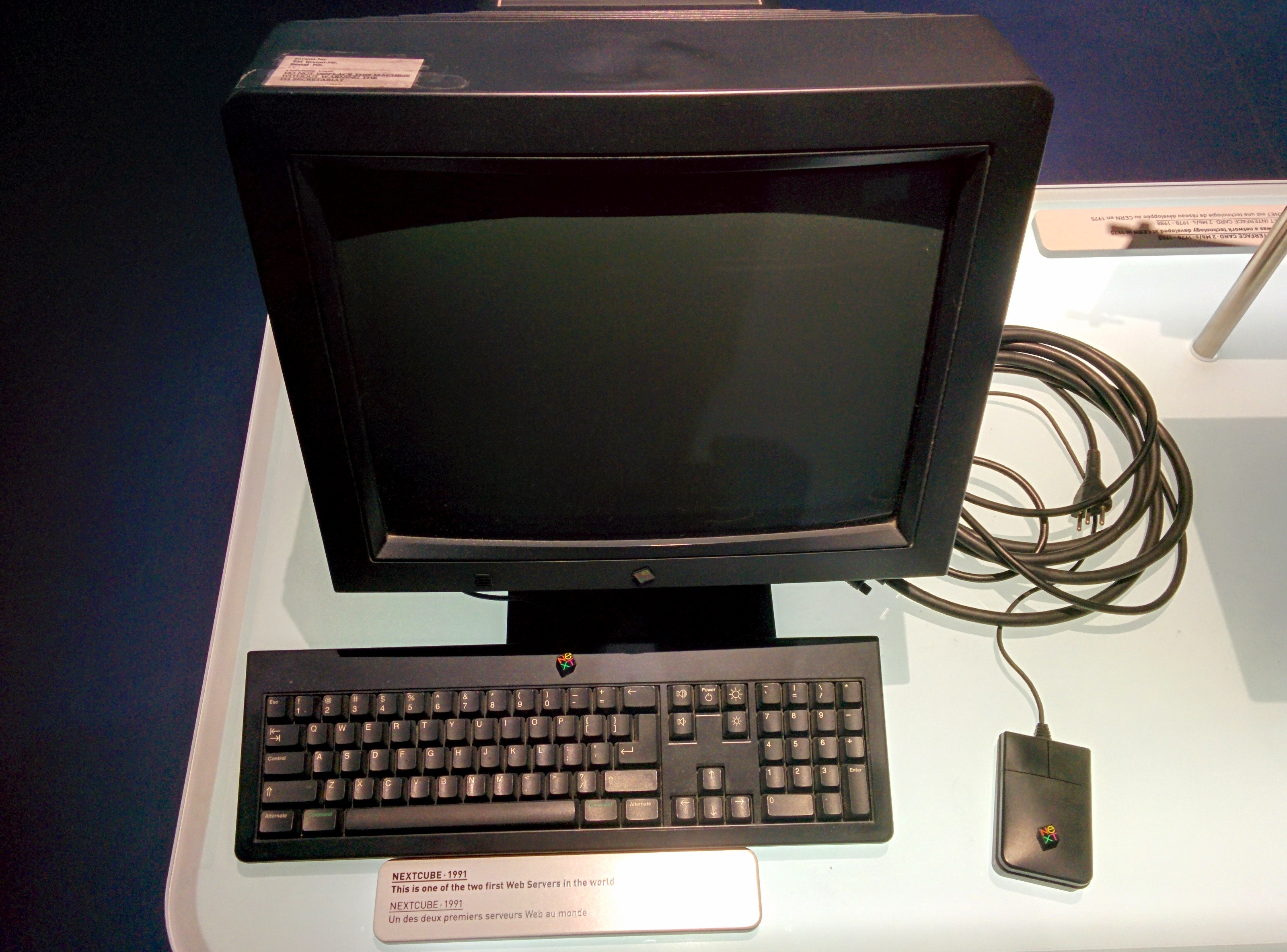 CERN has their own data center, which is also a museum of sorts for all kinds of old device, including one of the NEXTCUBE computers which served as the first web server :D

Cipri gave me a private tour of the SC as well, where there is a super awesome projection mapping, that overlays on top of a section of the old Syn­chro­cy­clotron how it was assembled, how it worked and what kind of results it obtained. Un­for­tu­nate­ly, because it was closed for 20 years, the purpose of many of the tools and hardware that is there is no longer known :))

After this, Cipri and I went to a barbecue at some of his CERN friends. This was really nice because I got to hear a lot of stories that you wouldn't normally hear from a guide :)) (and I also found out that "mici", a tra­di­tion­al Romanian grilled meat, is called "c­se­vap­c­sic­sa" in other languages). They told me about the UFOs (Uniden­ti­fied Falling Objects) that plague CERN. It is not yet very well known what are these things, but they often cause problems by in­ter­fer­ing with the beam and causing it to become unstable, so it has to be dumped. Dumping the beam is done by letting it go into a large slab of concrete and graphite, and there are rumours of the sound it makes as it slams into it. Another tale is how when the engineers from CERN went to the worlds largest magnet man­u­fac­tur­er and asked for a 35 tonne, 15 meter long magnet, they were basically laughed out of the building. So they had to design it themselves, make a prototype, and then go back saying "If we give you the prototype, can you make us 1232 more magnets like this?". Another story was when they were looking for a way to reduce the heat losses of the vacuum chambers that are in the tunnel, they developed a reflective surface with which to coat the insides, so that there is as little heat exchange as possible. But went they sent it for painting, there was a mis­com­mu­ni­ca­tion and they got it back painted on the outside. It was a very nice paint job, very smooth, very uniform, just on the wrong side.

I'm very happy that I got this chance to visit CERN, as it was a dream of mine for a long time. I'm even more amazed by what the scientists and engineers do there, at what scale they work, and to be honest, maybe one day I would still like to work there. 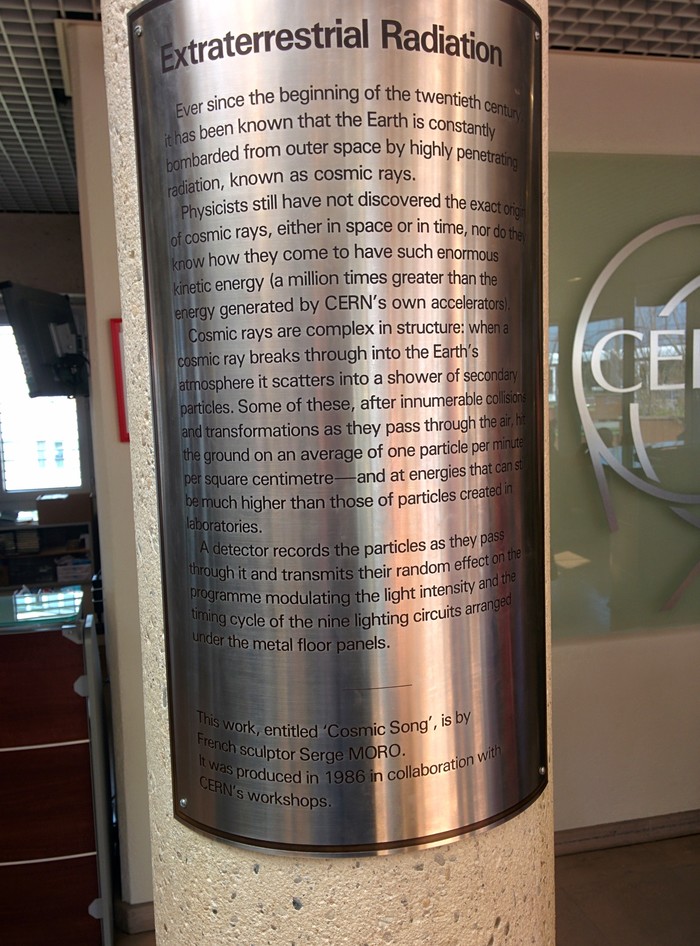 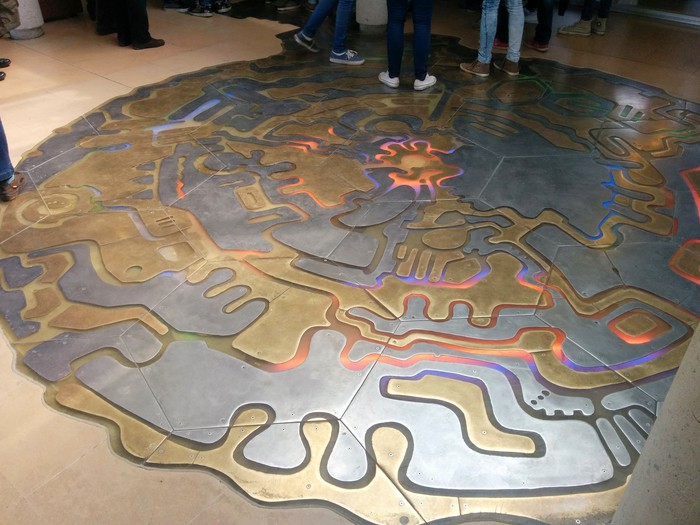 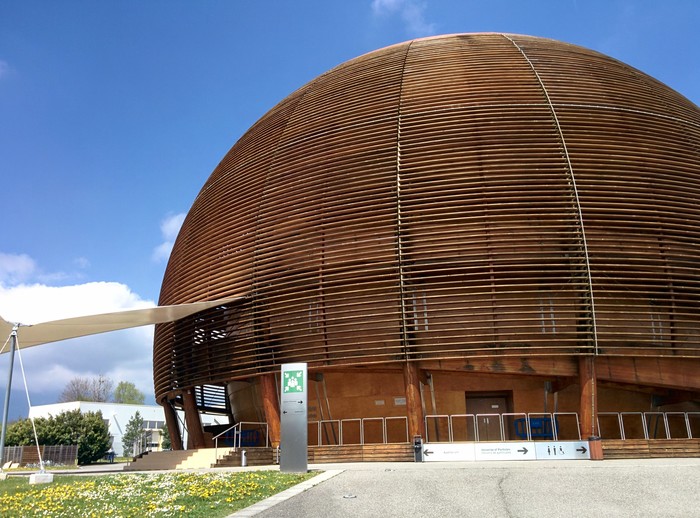