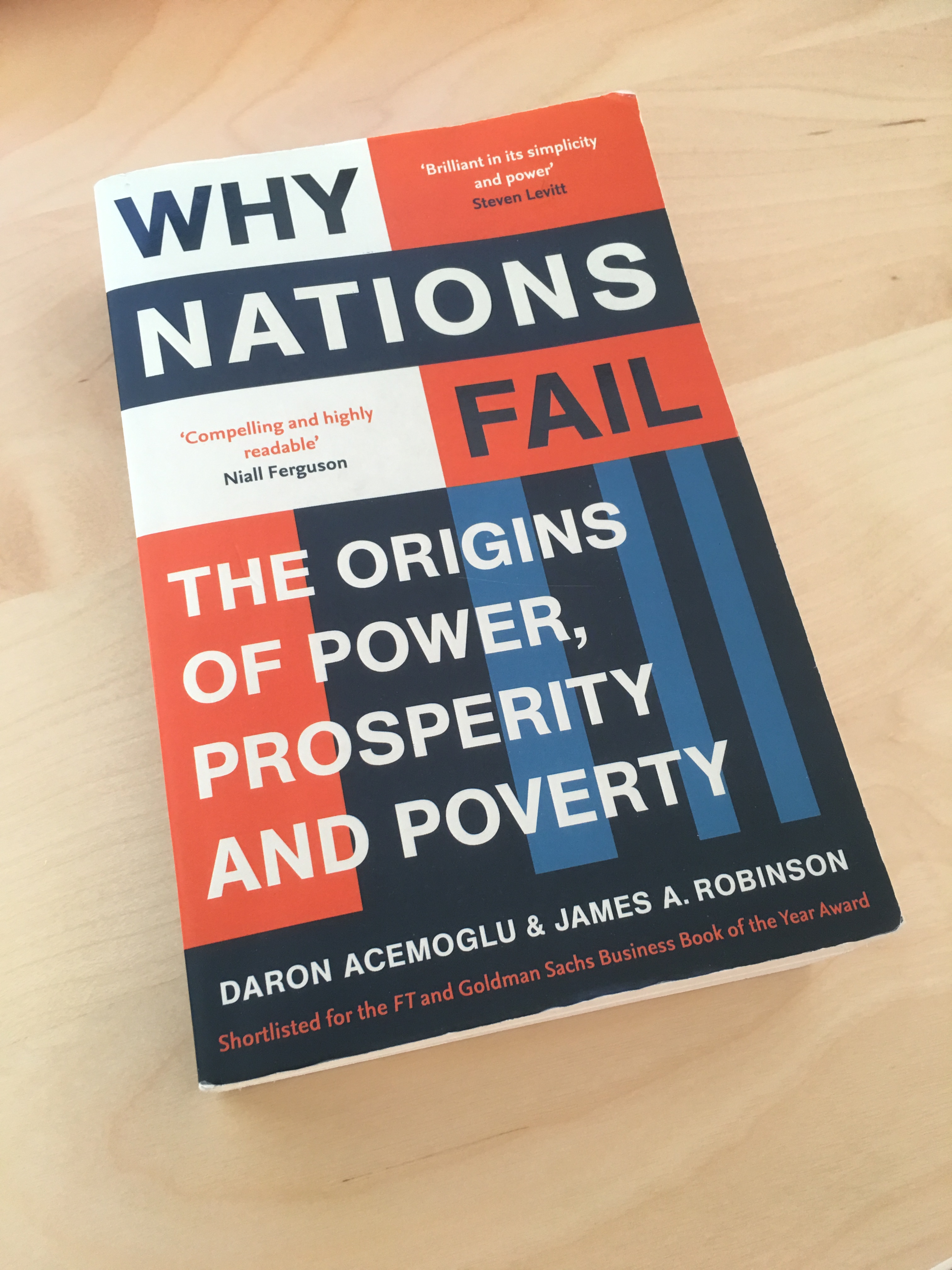 I finally finished this book. I bought it from one of the authors a year and a half ago. The book has seen some serious mileage in my hands, having been to the Belgium and to the US. But I finally managed to read all of it. Having a goal to read 28 books this year really helps focusing on this.

I enjoyed the book very much. I don't nec­es­sar­i­ly agree with the hypotheses that it presents, but it also provided a good history lesson for me. Apparently I had some big gaps in my knowledge of things that are 1) far from me 2) happened a long time ago and this book was eye-opening for me in at least getting a very basic un­der­stand­ing of some of the issues that lead to the current economic status quo.

The basic premise of the book is that some nations are more successful than others because they have more inclusive in­sti­tu­tions, while the ones that are poorer have more extractive in­sti­tu­tions. The inclusive in­sti­tu­tions mean that the barriers for entering and competing in a new business or taking part in decision making are quite low and everyone or almost everyone can do that. On the other hand, extractive in­sti­tu­tion con­cen­trate economic and political power into the hands of a small elite who then do whatever they please. There are two aspects to both in­clu­sive­ness and to ex­clu­sive­ness, one being the economic side and the other the political power.

The reason for the need for in­clu­sive­ness is because that's the only thing they say that allows creative de­struc­tion. Otherwise, the people who are currently making money in a certain industry, will block in­no­va­tions that will take away their source of income, such as various textile industries did in the UK around the Industrial Revolution. In an inclusive political context, no one has sufficient power to block anyone else unfairly, so the best man wins.

The authors give several examples of nations that started of in a quite inclusive way, such as the Roman Republic or Venice in the 11th century, which enjoyed tremendous prosperity, but slowly then drifted towards more con­cen­trat­ed forms of ruling, such as the Emperor in Rome or the Council in Venice, and in the end both failed horribly.

They also cite as examples the evolution of the United States, in contrast to how Mexico and South America developed. Because the initial population density in North America was much lower, the tactics used by the con­quis­ta­dors in the southern parts didn't work there, so the local people had to find different ways of organizing themselves. What the authors forget is that in the end Native Americans in the US still got their rights trampled and almost all their land taken.

The Soviet Union and China are used as examples of growth under extractive in­sti­tu­tions, but they say it's not sus­tain­able, by pointing out where Russia is now.

One of the most shocking examples for me was about Africa. For some reason, my knowledge of Africa and its history was quite limited and I knew only mostly typical stereo­types. I'm em­bar­rassed to admit that in my mind, Africa was such a poor continent because the people there lived half-naked in the desert, played the Makuta drum and danced with shamans. I knew that there had been some extremely bloody conflicts, that had resulted in the death of millions of people, but I thought that they were just some tribal warfare, scaled up. Well, it turns out that a huuuge part of the problem is due to the way European countries interfered and basically looted Africa when they "col­o­nized" it. They set up various in­sti­tu­tions and systems to make sure that the money/slaves/resources go to them. Usually this involved some sort of local governors or chieftains who made sure that the people paid their taxes and kept working in the mines or wherever was needed. After the Europeans left, they "forgot" to take the chieftains with them, so of course they continued to do the same thing, except now all the money was going to their pockets. Then of course somebody from the population thought that this is unfair, they organized a rebellion, started a civil war that resulted in the deaths of many people, and ended up taking up the power for themselves, without making the lives of ordinary people any better.

Another thing that was a surprise to me was just how recent the current power dis­tri­b­u­tion of the world is. For some reason, I had assumed that the current pecking order, especially in Europe, had been the same for a long time. I didn't know the important role the French Revolution had in almost every other European kingdom, by over­throw­ing the feudal system that had existed in many places and helping new systems take its place.

I don't fully agree with the argument that democracy is the best form of government. I believe that monarchies can also lead to economic growth, as long as the kings are God fearing. Because in the end, that's what matters, what are the values of the people at the top. If they have the best interests of the nation at heart, then the nation will do well. If not, it doesn't matter. In a democracy, if you manage to fool enough people (via mass media) to vote for the wrong thing, it will still end up bad for them. Most people can't do a proper analysis of the situation to make sure that whatever big economic or political choice they make is in their own interest. I know because I can't really be bothered to do that, I would much rather do plenty of other things with my time.

To summarize, I enjoyed the book, it offers a pretty good per­spec­tive, and a very good summary of a large part of the history of the world. The style of the authors is pretty enjoyable. My only problem would be that they don't really search for counter-points to their theory.