Remember my old project for processing instant messaging logs? Probably, because I wrote about it five years ago. Well, the project is only mostly dead, every once in a while I still oc­ca­sion­al­ly work on it.

I mostly use it as an excuse to learn tech­nolo­gies that are used outside of the Google bubble. One thing that really impressed me with how well it works and how easy it is to set up was Elas­tic­search. Elas­tic­search is a search engine. You give it your documents and it indexes them and enables you to query them fast. There are other projects that do this for you, but ES can do scaling to multiple machines out of the box, has sane defaults for how to process text and it has many addons. One of the amazing addons, built by the same company, is Kibana, a dashboard and reporting tool, perfectly integrated with Elas­tic­search.

Let's see how we can get our data into Elas­tic­search and how we can learn something from it. We're going to use the Python bindings and I assume that you have all the official packages installed. I'm going to assume that getting the data is a solved problem and we basically have an iterator that produces dic­tio­nar­ies of the following form:

To add the data into Elas­tic­search, we use the following super short snippet:

And that's about it. Normally, Elas­tic­search can create indexes au­to­mat­i­cal­ly when you first import something, but in our case, it has a wrong default for the message field, so we have to manually specify that it should have the fielddata setting true.

Now let's see what this gives us. We are going to start Kibana, which is the dashboard creating tool for Elas­tic­search. There we can explore our dataset and filter by everything: 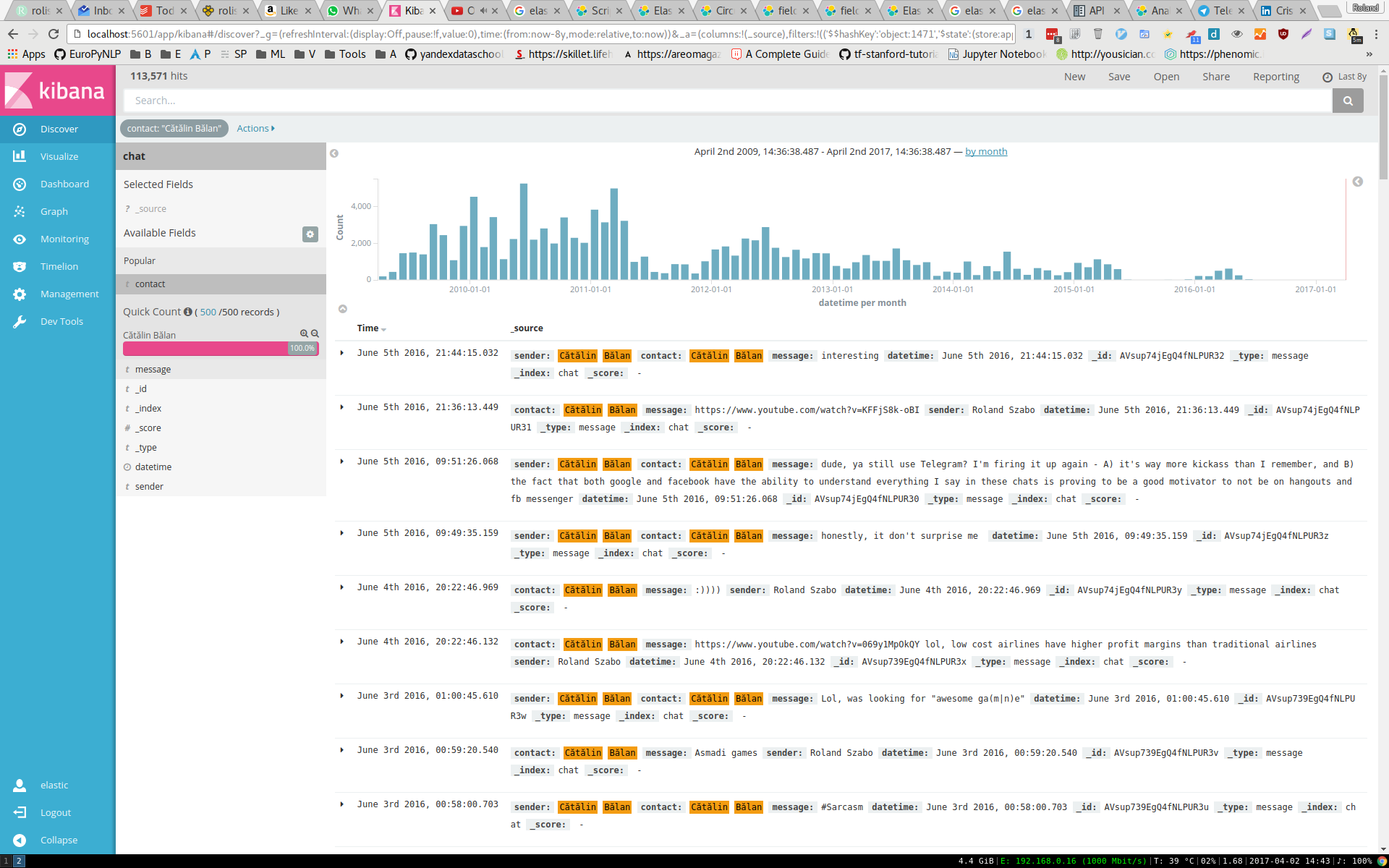 This shows you some of my dis­cus­sions with Cătălin. At the top you can see the number of messages we've had over the years. It's a partial lie: in the second half of 2015 we talked over Wire and I didn't save my dis­cus­sions from there and since the second half of 2016 we've been talking on Telegram and I haven't written the import tool for that.

Below that you can see some of the actual messages, with all the metadata. It's quite nice to explore your data and to reminisce over old con­ver­sa­tions.

Then we can switch to the Visualize tab and create some pretty graphs: 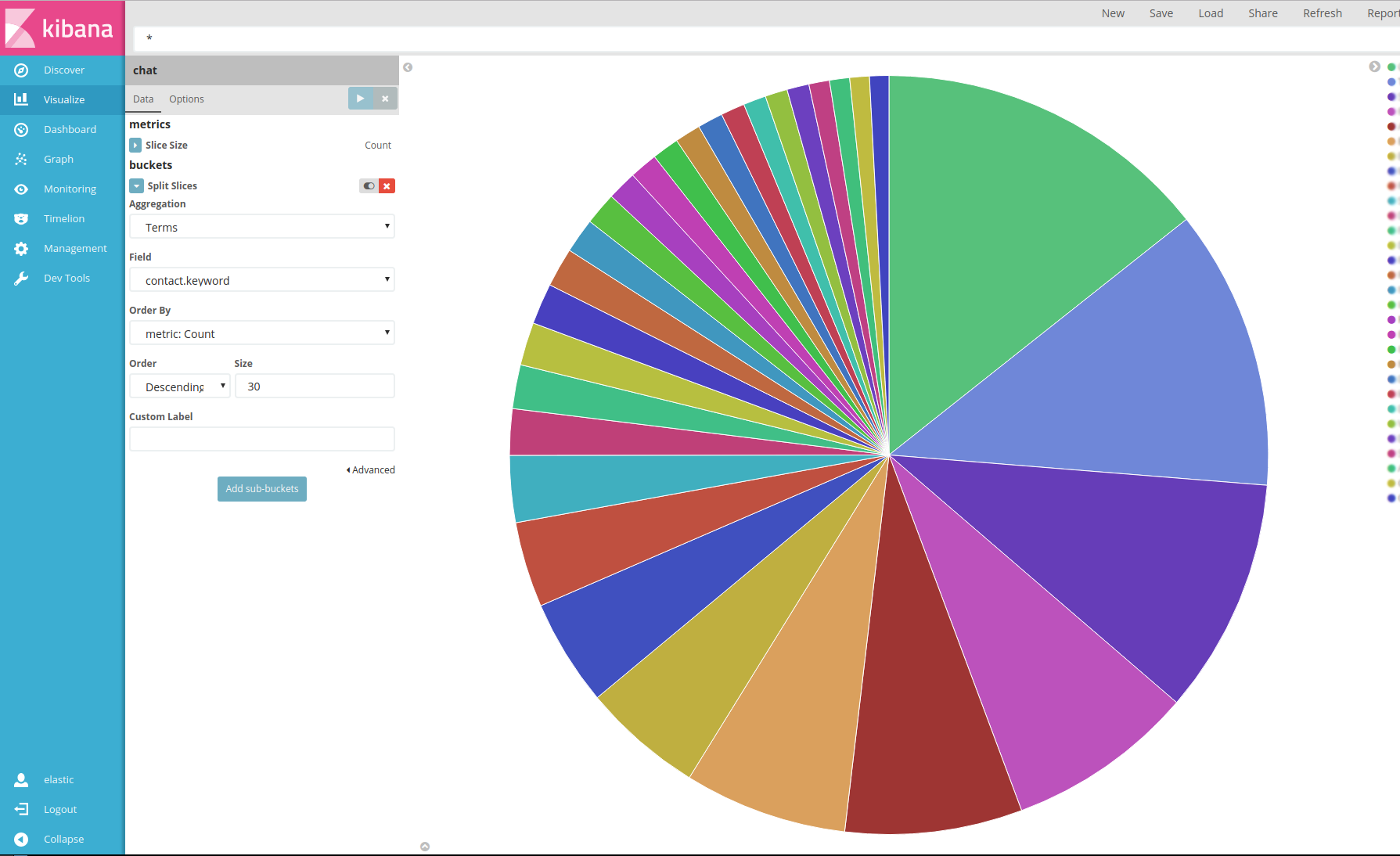 This is a graph of the top 20 people I have talked with. Cătălin leads the pack, because I have been talking to him for about 9 years and then there are various friends. One thing that was surprising to me was how some people with whom I haven't talked in 3-4 years are still there, meaning that I must've talked to them a loooot before that. 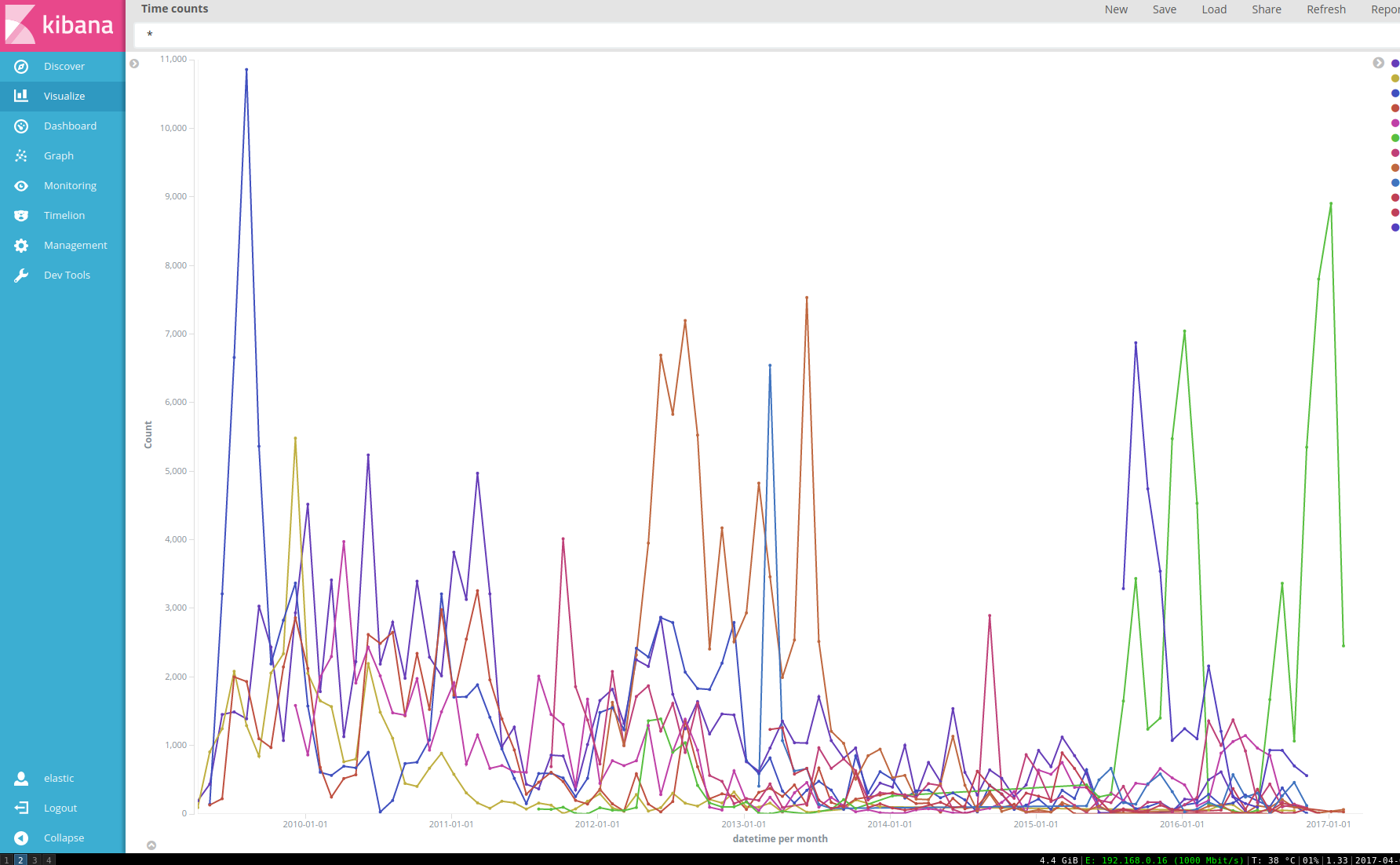 Another easy graph to make is to plot how much I've talked to my top 20 contacts over the years. As you can see, there is a lot of variation. It's hard to tell much just by eyeballing the data, but it seems that most of the time there are burst of activity with a friend and then we talk much less for a while. Maybe I should use it to decide who to talk to again. :D

The last thing I want to show is from an addon to Elas­tic­search, called X-Pack. It's a paid addon, but it has a free 30 day trial. It has a module called Graph, where you enter certain keywords and it shows you related terms. 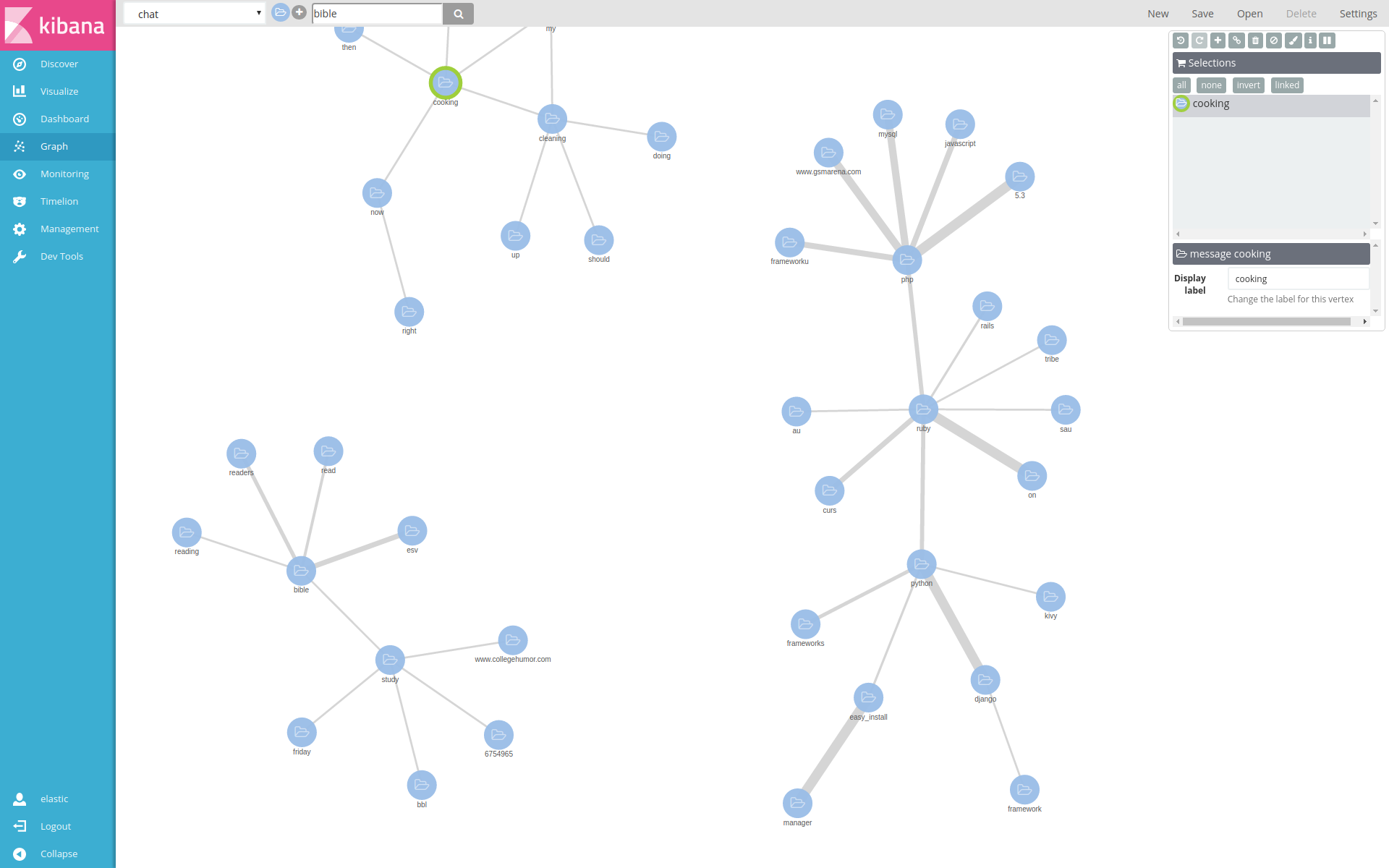 To get this image, I entered Python, Ruby, cooking and Bible. As you can see, it "knows" that Python and Ruby are connected. Even more, it knows that Django is a Python framework, while Rails is a Ruby framework. PHP and Javascript are also pro­gram­ming languages, so they are part of that cluster.

But cooking forms a different cluster, together with cleaning, which I should be doing :D

Bible is another separate cluster, with study and reading. It figured out that I use the ESV Bible trans­la­tion. The re­la­tion­ship between study and col­lege­hu­mor is funny: I sent a certain link to many people, which was about "studying" and this confuses it into thinking the two are related. Alas, humour still beats modern AI techniques.

Con­sid­er­ing how much effort we invested into this, it gives really good results. Of course, it's helpful that I have a lot of data from which it can learn.

I find Elas­tic­search a great tool for quickly searching when I talked to someone about a certain topic and for doing some simple vi­su­al­iza­tions. It's super simple to use, but still powerful.