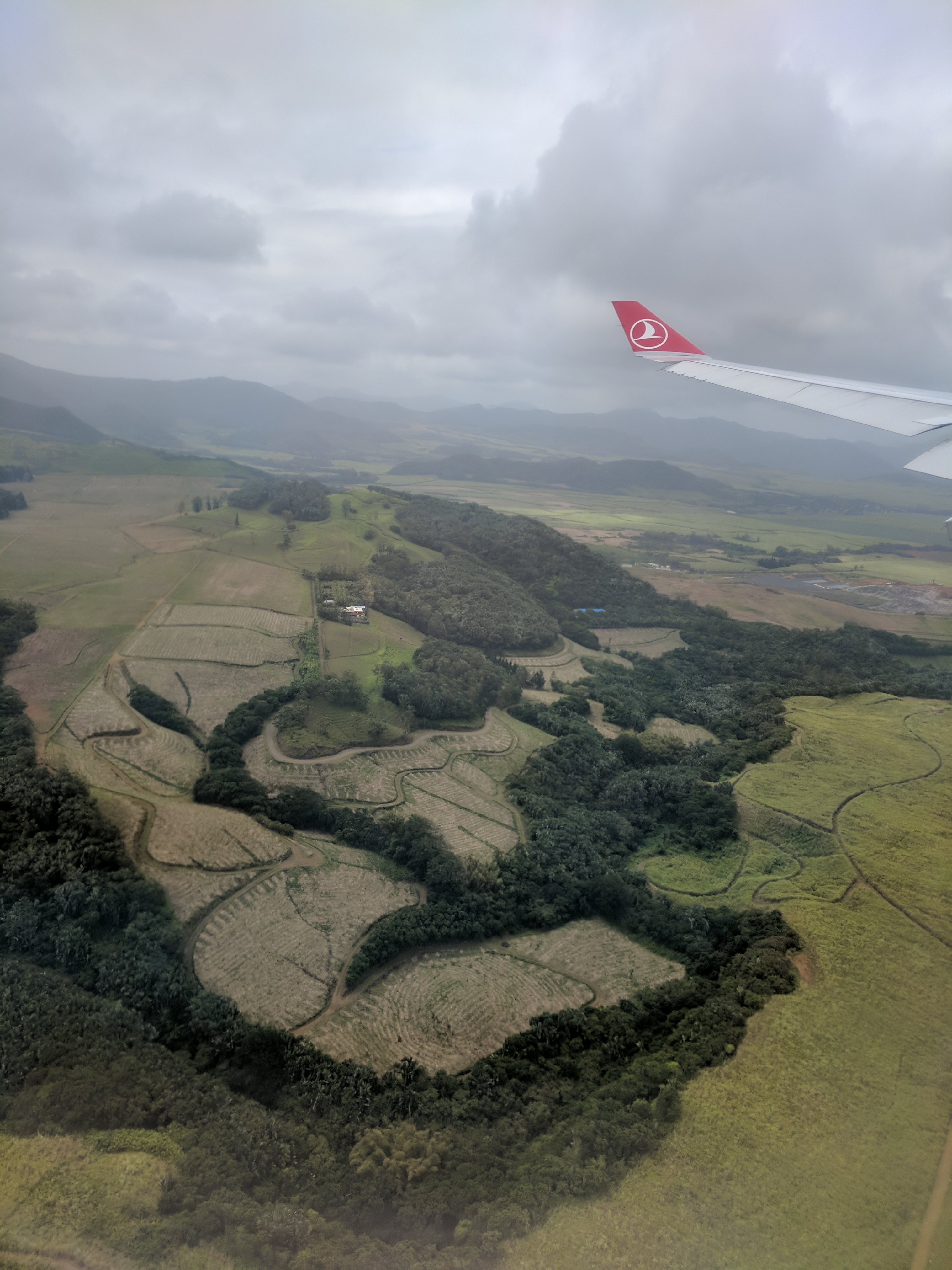 Because of work, I couldn't take a long, proper vacation right after our wedding, so we decided that after some deadlines at the beginning of September, we would do a nice, two week honeymoon. Given that I love flying and I need the frequent flier miles, while my wife was not so thrilled about the idea of spending more than 10 hours in a tin coffin whizzing around the air at 900km/h, we had to find a middle ground. After lots of searching on Pinterest for honeymoon locations, we decided to go to Mauritius. It's fairly far, it got me the miles I needed to keep my Gold status, we got to visit a new continent (well, kinda) and it was less than 10 hours of flight per segment.

For those of you who haven't heard of Mauritius, it's an island close to Madagascar, about 2000 km to the east of Africa. It's not to be confused with Mauritania, which is on the west coast of Africa. Mauritius is really small, 2040 km^2, less than the size of a county in Romania and with a population of 1.2 million people. It was un­in­hab­it­ed until 1507, when the Portuguese came and promptly ate all the dodos that were on the island, which went extinct when the Dutch came to the island. The Dutch were replaced by the French and then by the British. The island gained its in­de­pen­dence in 1968. It currently is ranked as the most democratic country in Africa and it has a woman as president, Ameenah Gurib.

The first impression upon arriving in L'ile Maurice was really good. The airport is very clean and well maintained (much nicer than the one in Cluj). The taxi I ordered was waiting for us and the driver was very courteous. And the roads, oh those roads. They were better than in Romania. Maybe I had gotten my knowledge from the wrong movies, but I was certainly expecting a lot more potholes. Well, there were 0 potholes. And there was a highway! With beautiful views along the way! The airport is in the south­east­ern side of the island, while our hotel was on the north­west­ern side, so we got to see quite a lot of the island on our way there. It got us super excited for the upcoming two weeks!

Opposed to my ex­pec­ta­tions from movies, Mauritius has a quite developed economy. Its GDP per capita is ever so slightly higher than Romania's. Prices were also quite similar, for things like restau­rants or groceries. But once when we went off the "beaten", touristy path, we saw a lot of shanties, so I'm curious how much can people who live there afford. 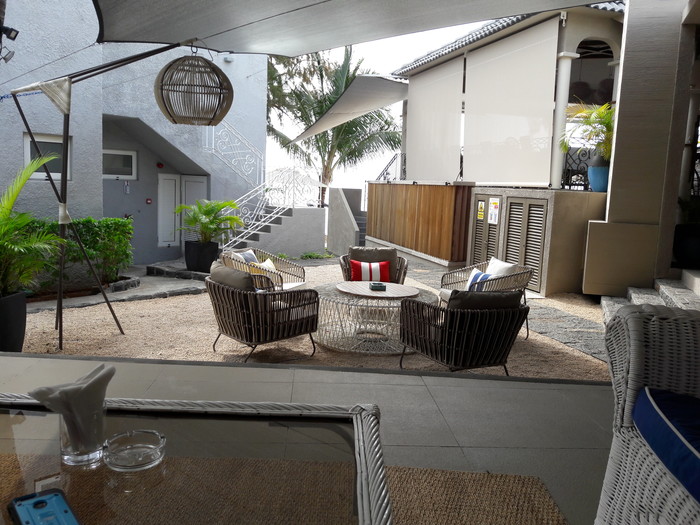 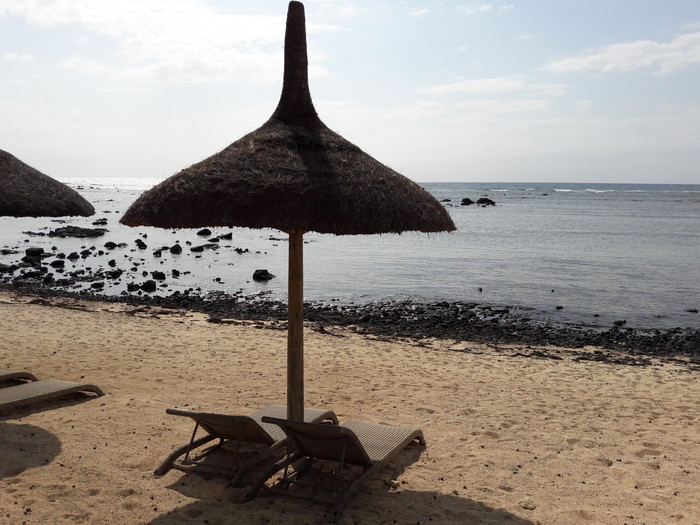 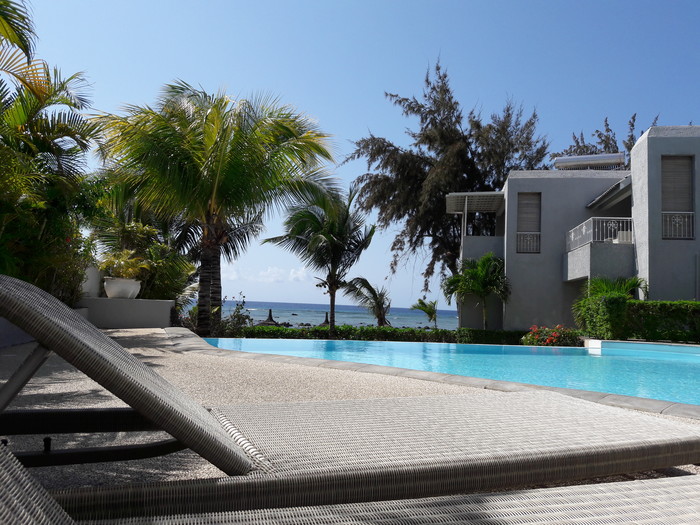 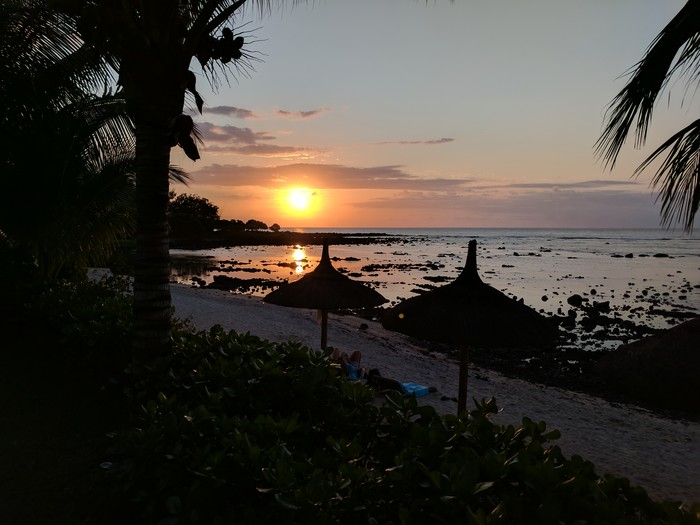 While our hotel room was right next to the ocean, we initially had some problems with the hotel. The WiFi was extremely crappy. I normally have my own WiFi extender, but because I never used it, this was the first time that I didn't pack it with me facepalm. After asking at the reception, they gave us a small router for our own room. Then, the shower drain got clogged. Then the sink got clogged. Then the breakers for some of the outlets got in­ter­rupt­ed. That took some time to figure out. And last, but most "fun": we had a fairly large spider in our room. And it ran really faaaaaast. But I managed to hunt it down! So I got extra brownie points with my wife :D 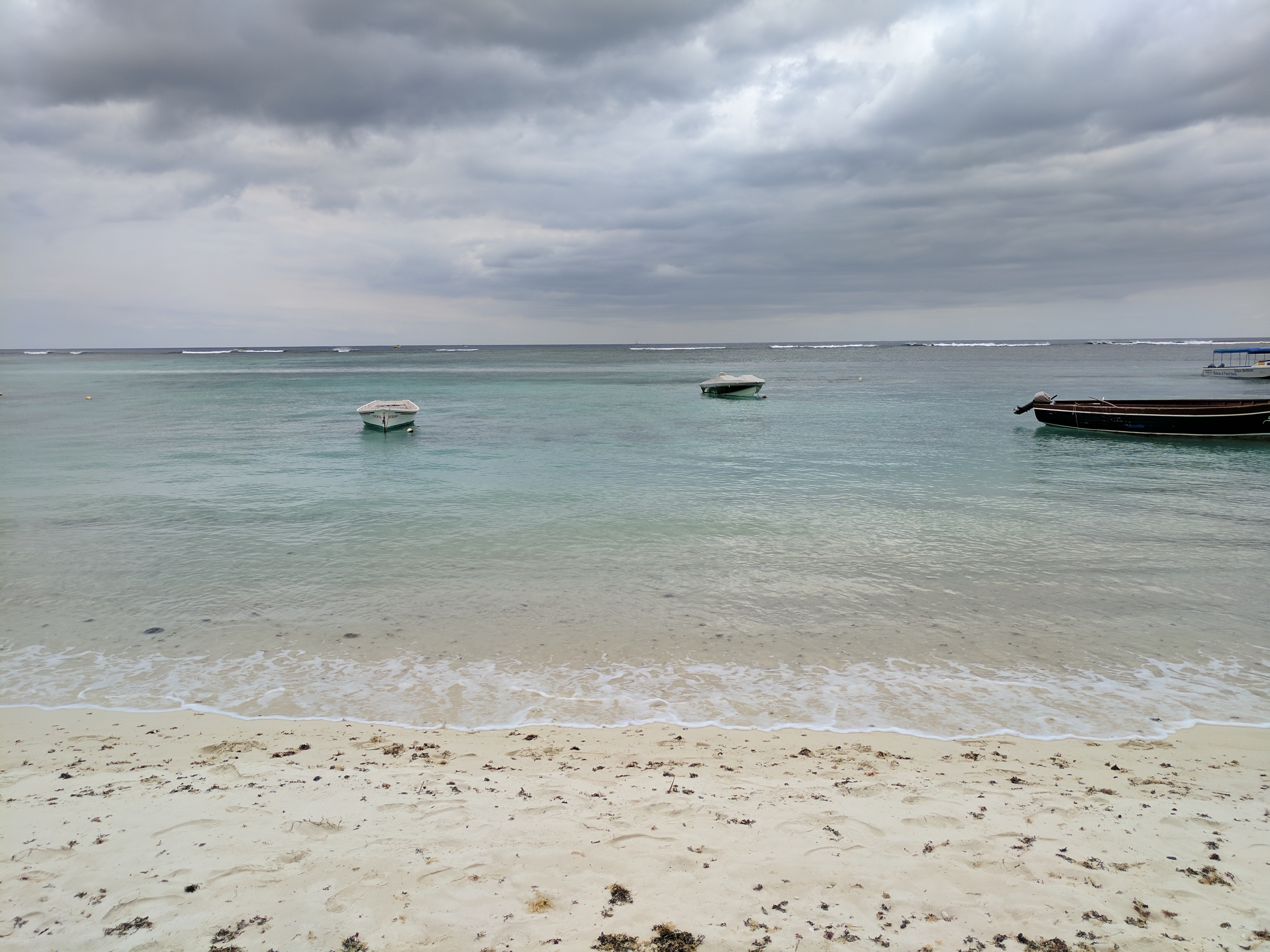 We spent the first couple of days relaxing, exploring the nearby beaches. The beach right next to us was rocky right, but another nicer one was about 50 metres away and a really nice one, in Pointe aux Biches, about half an hour away. That one had the advantage of being close to a su­per­mar­ket and several restau­rants, so it quickly became our favorite spot to swim around and snorkel (for me) and sunbathe (for my wife). 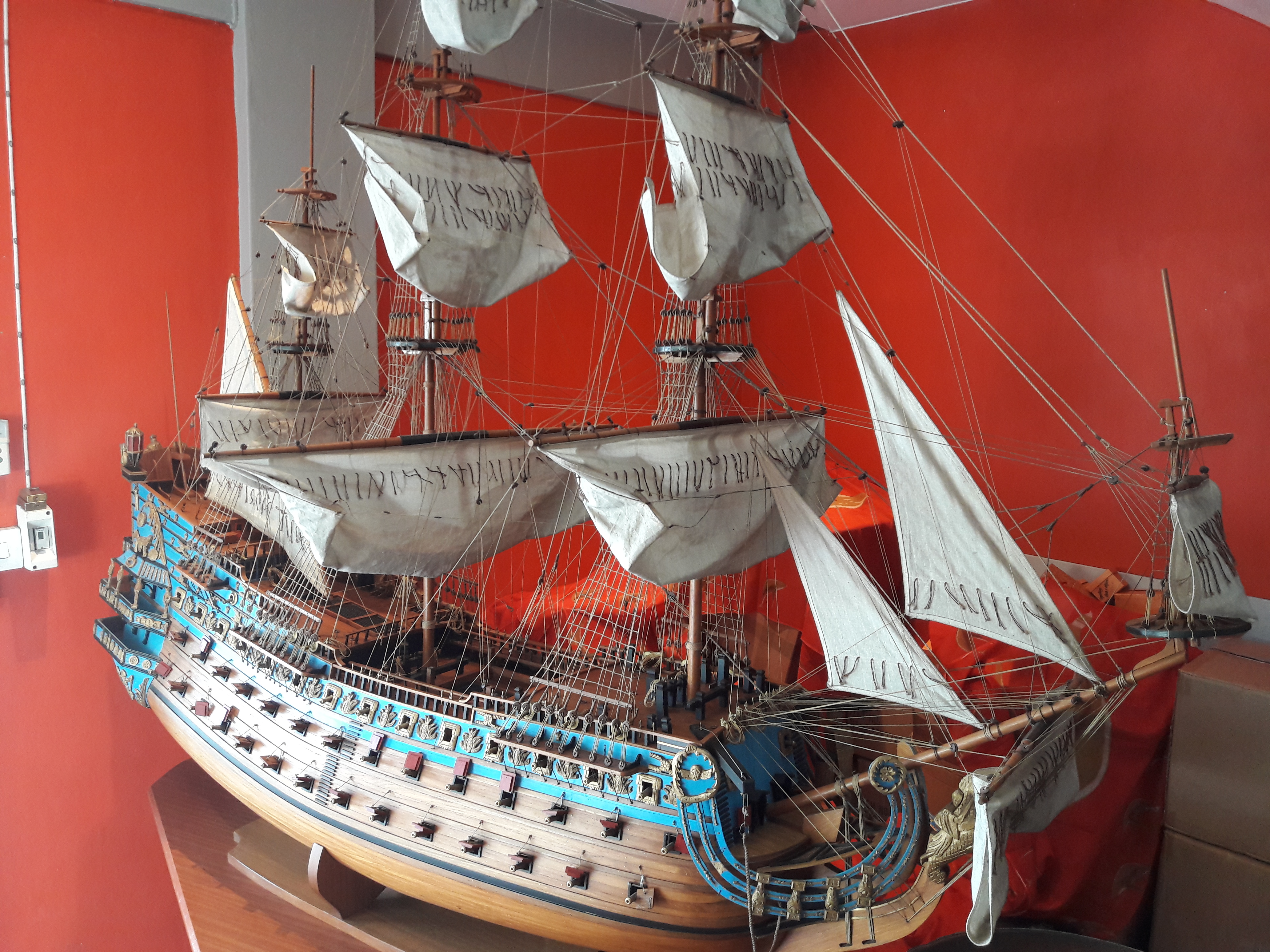 On Wednesday we got a taxi tour of the island. The driver came to pick us up at 9 AM. The drive took us through some scenic routes, along the "moun­tain­s" of Mauritius, with peaks such as Pieter Both. The first stop was at a handmade miniature ship factory and then at several local silk and cashmere shops, where we got some deals that I'm sure were amazing (I should really improve my ne­go­ti­a­tion skills :|). 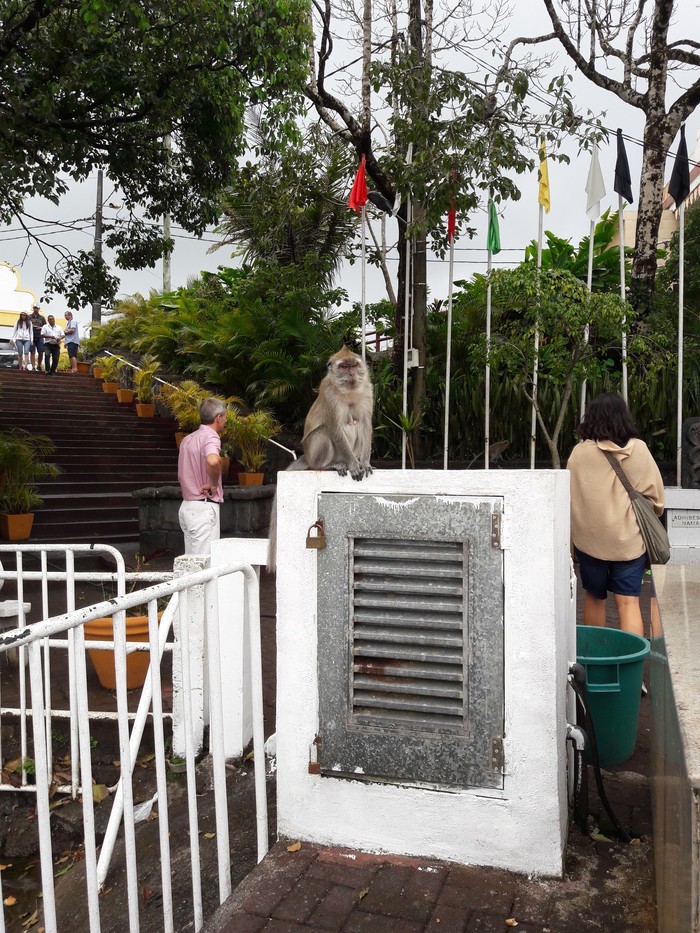 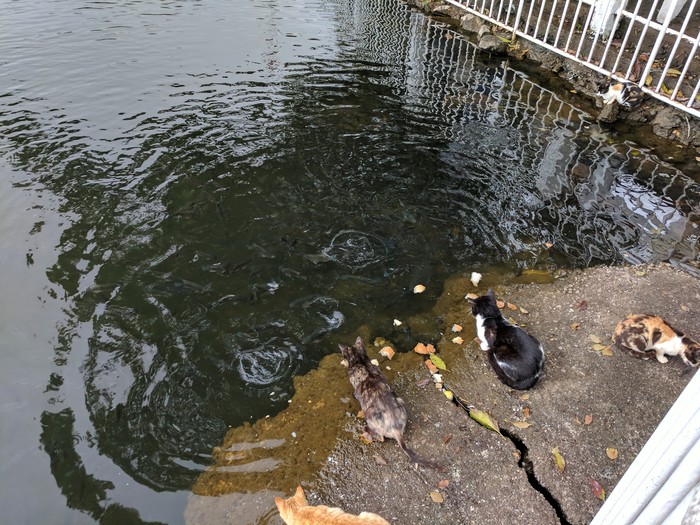 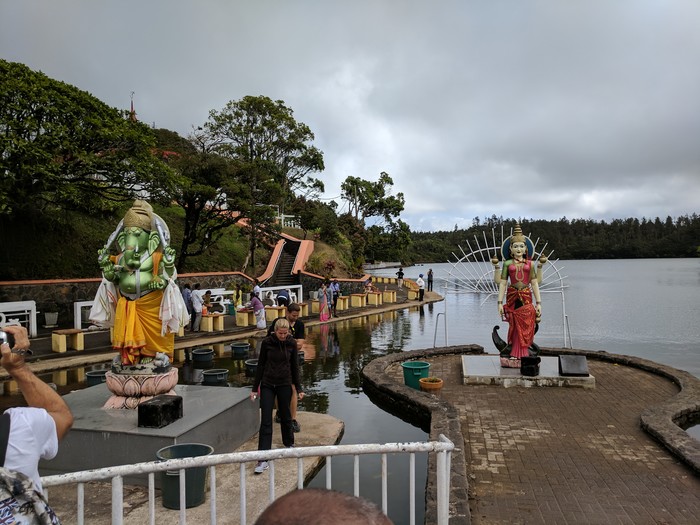 Then we went to the Ganga Talao, the largest Hindu temple in Mauritius, situated in Grand Bassin. The temple has 108 feet tall bronze statue of Shiva. It also has lots of monkeys and cats and there is a fish feeding place. It was my first larger contact with Hindu religion and... most of their gods look ugly and scary :/ 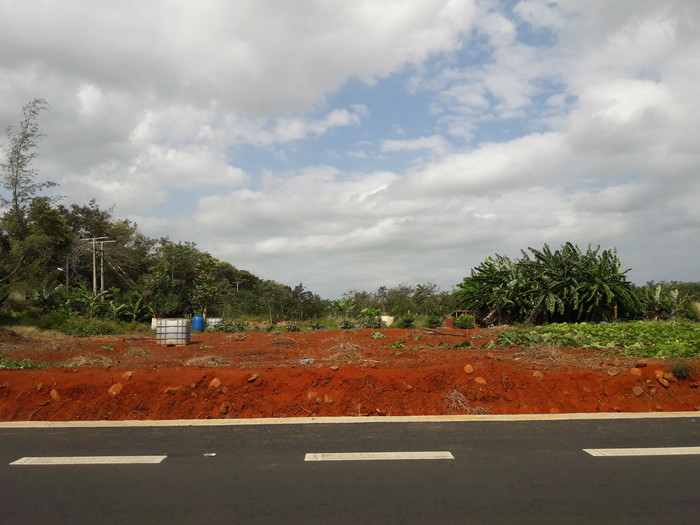 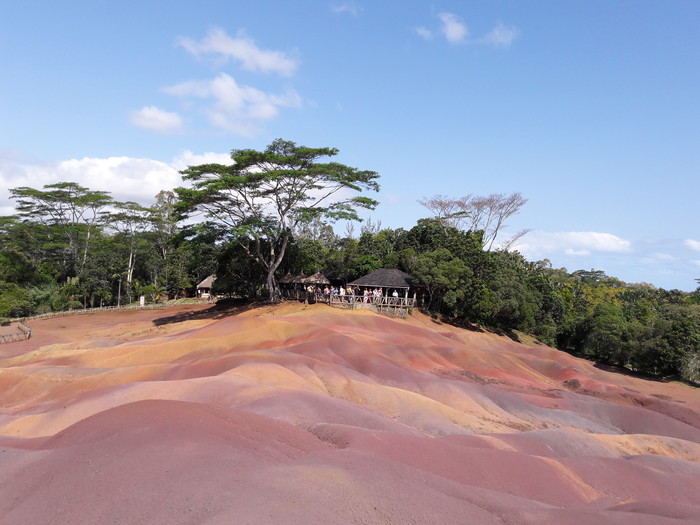 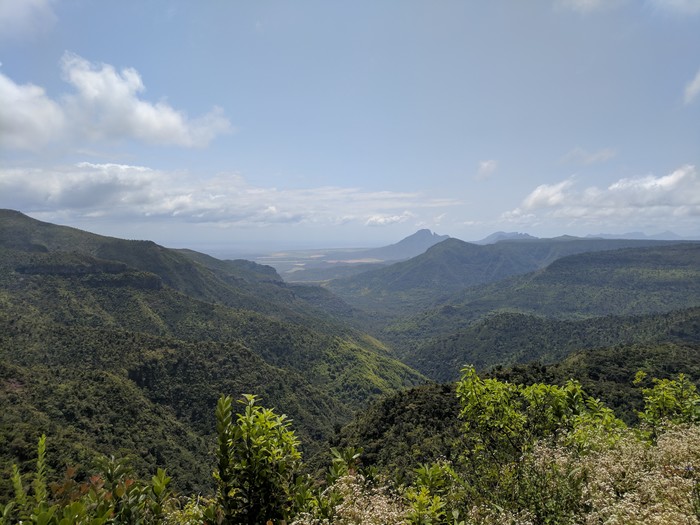 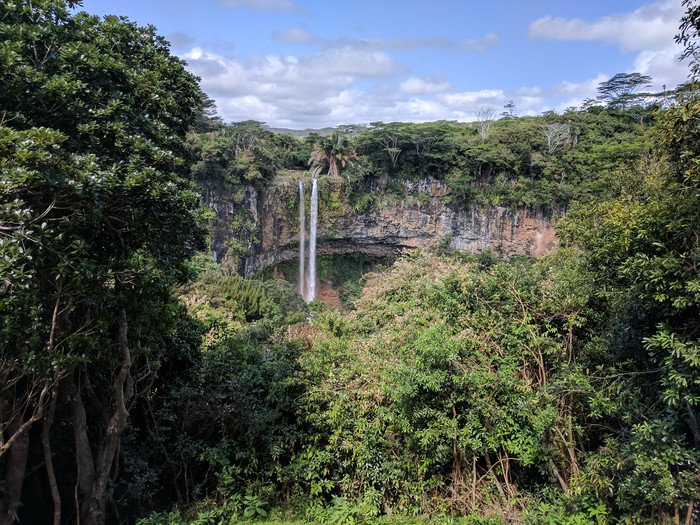 Then we went to Chamarel, which has some pic­turesque waterfalls and a seven coloured earth. Mauritians have something with coloured earths: there's a region called Terre Rouge (with red soil), there's this 7 coloured one and then there's another one with 23 colours. Btw, we had to squint really hard to see even the 7 colours, but it was definitely pretty. 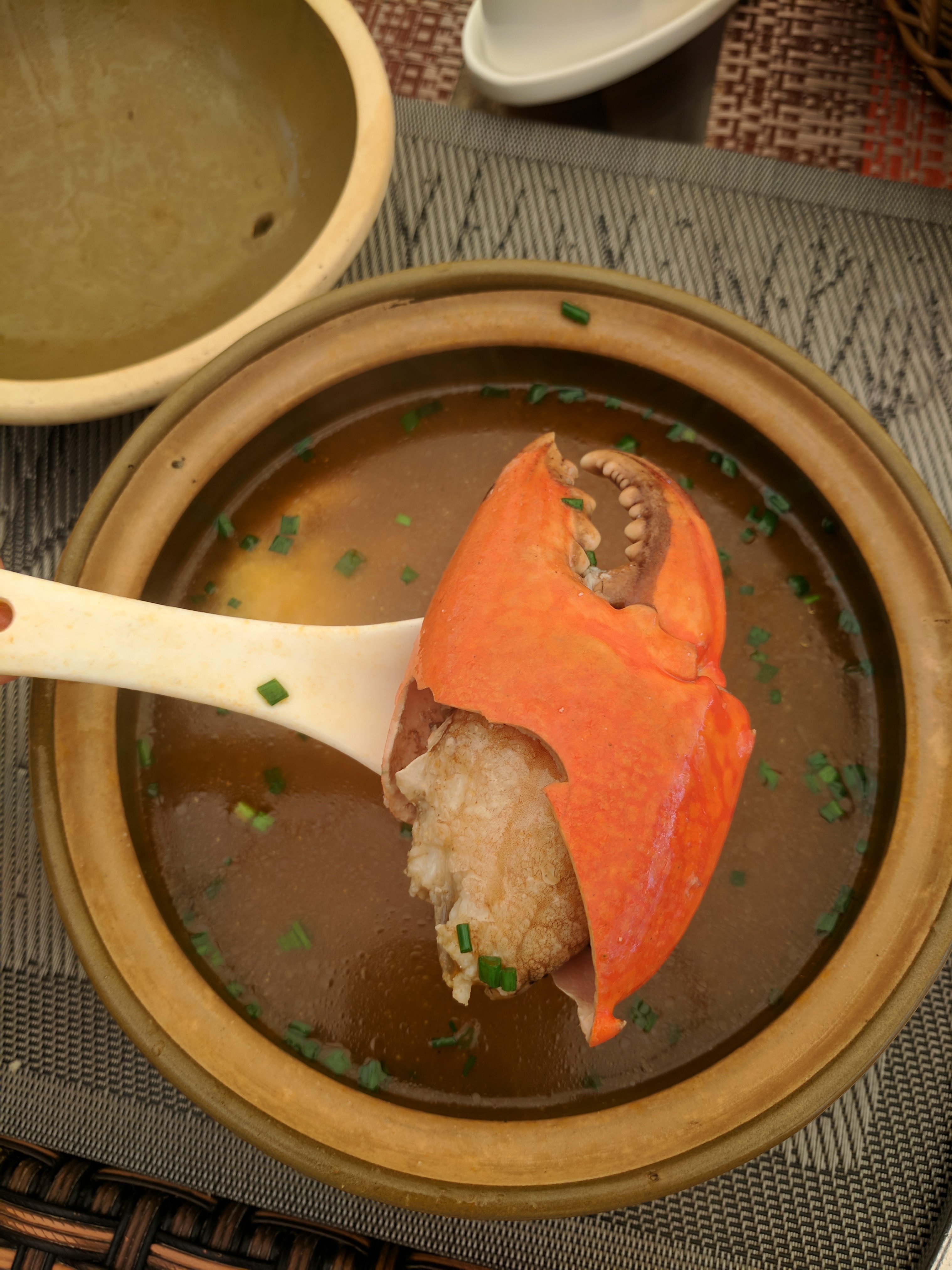 For lunch we had some crab soup. Even though she doesn't like seafood, my wife had to admit that the soup was delicious (but she didn't taste the crab meat :))).

Taxis work in­ter­est­ing­ly on Mauritius. You can get a taxi from the airport to anywhere on the island for a flat fee of about 35 euros. In our case, the ride was about one hour. Renting a taxi for a full day of driving around, with the driver explaining things to us, was about 70 euros. But taking a taxi from one of the malls to our hotel, a 15 minute ride, was about 15-20 euros, so dis­pro­por­tion­ate­ly expensive. 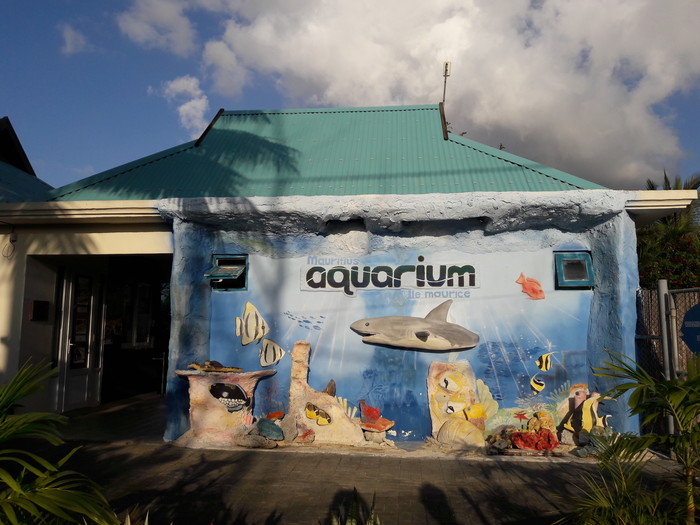 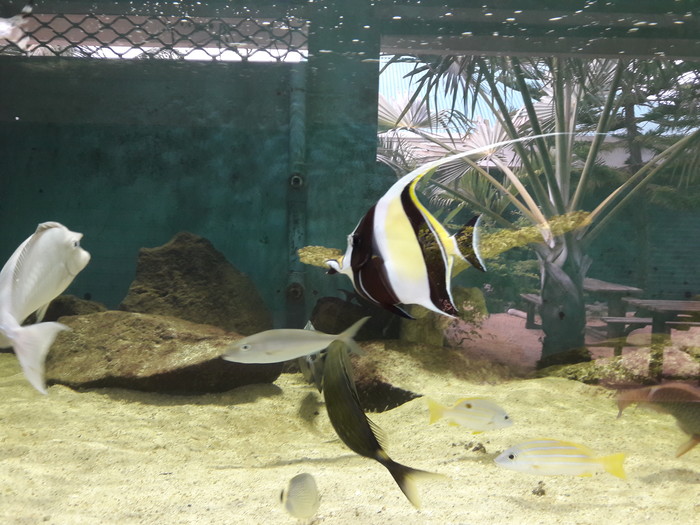 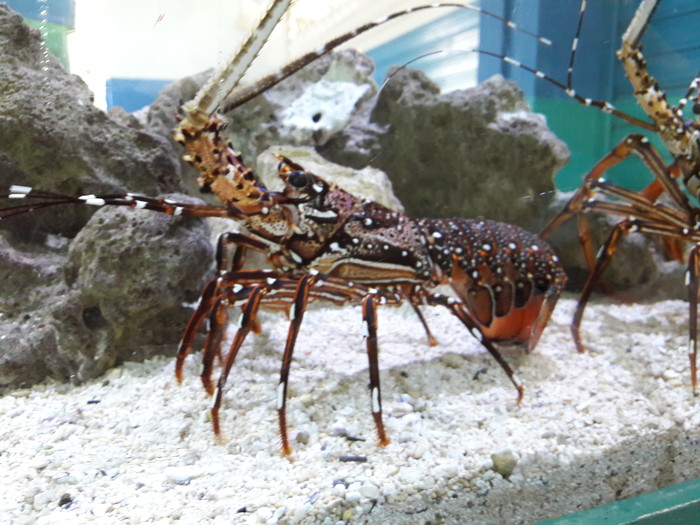 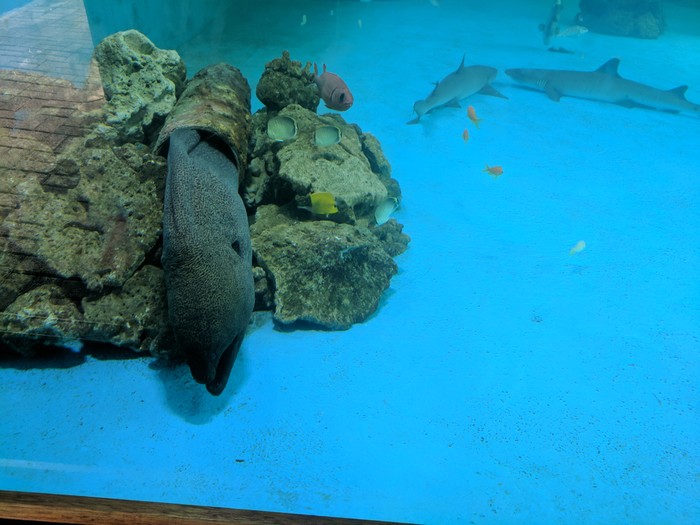 Another day we went to the Mauritius Aquarium, which was about 10 minutes from our hotel. We saw some of the fishies from Finding Nemo :D And sharks! And moray eels! And some ugly looking water bugs. We went right around feeding time and we chatted with one of the employees. He was a very friendly guy. He thought I looked Chinese (along with another person :|) and he had a nephew who had studied medicine in Romania and acquired an iPhone via dubious means. True story.

There were many street hawkers trying to sell you stuff on the beaches. After I paid more than I want to admit for an ice cream, we mostly refused them, but there was one very friendly guy, Rajesh Jugnarain, who came to us on several days and got us a pretty good deal on a speedboat ride to the Ile aux Benitiers. Thaaaat was fuuuuun. So, if you ever go to Mauritius, make sure you ask Rajesh for some excursions. And check out the reviews we wrote in Romanian in his notebook. 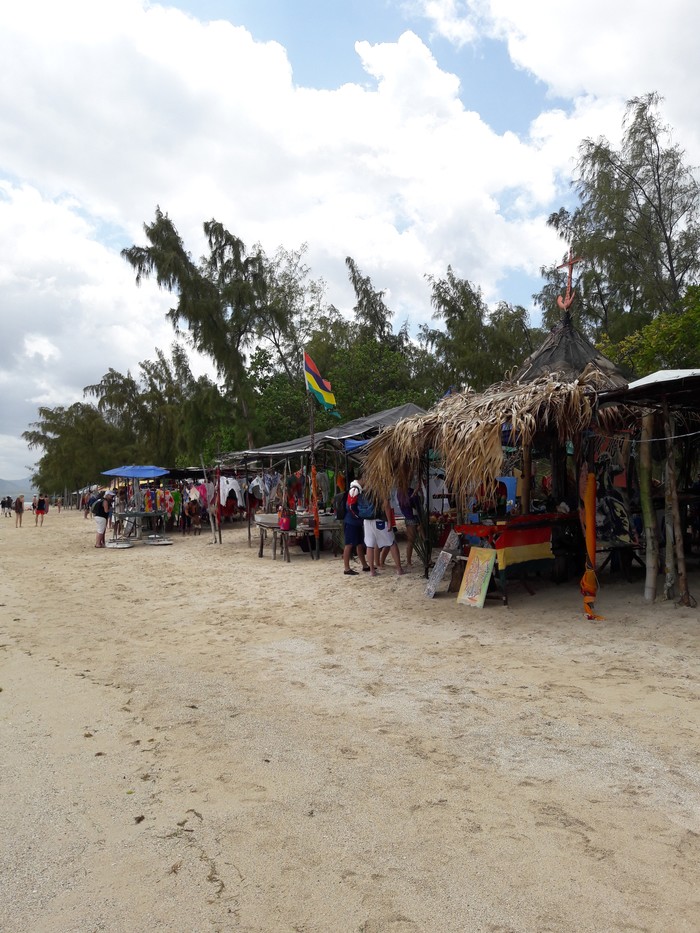 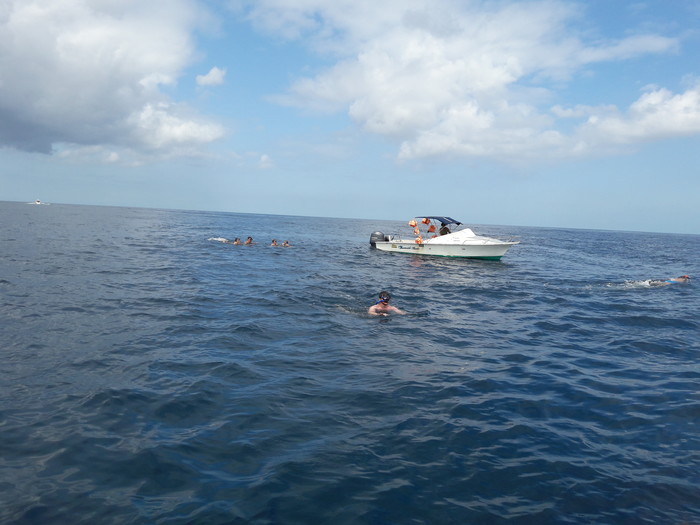 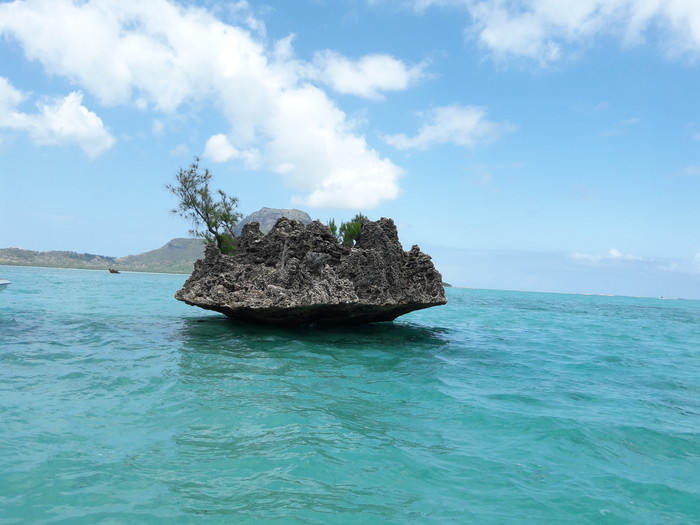 We had two guides, one of whom was piloting the boat. He drove as fast as possible, racing with another boat, which eventually got entangled in some fishing lines. He also wanted to make sure we get as wet as possible, especially my wife xD The other passengers on the boat were a family from South Africa who had a winery. The guy was from France and he had lived in Bora Bora for a while. There was also a family from London. They had a 20 year old daughter, but the mother looked so young that we thought the two were sisters. Even her husband made fun of her for going out to clubs with her daughter and getting smashed together.

With the speedboat we first went to a spot where we could swim with the dolphins. I feel kinda guilty, because I think it qualifies as animal abuse :| There were three dolphins, which spent most of their time at the bottom of the sea, but whenever they came up for air, all the pesky humans would jump into the water to get close to them. But of course, the dolphins would vanish again soon.

Ile aux Benitiers has a beautiful, fine sand, with clear turquoise water. The guides also cooked an amazing lunch, with barbecue chicken with best sauces in the world. We washed everything down with some Jungle Juice. I don't want to know what it contained, but it was good. 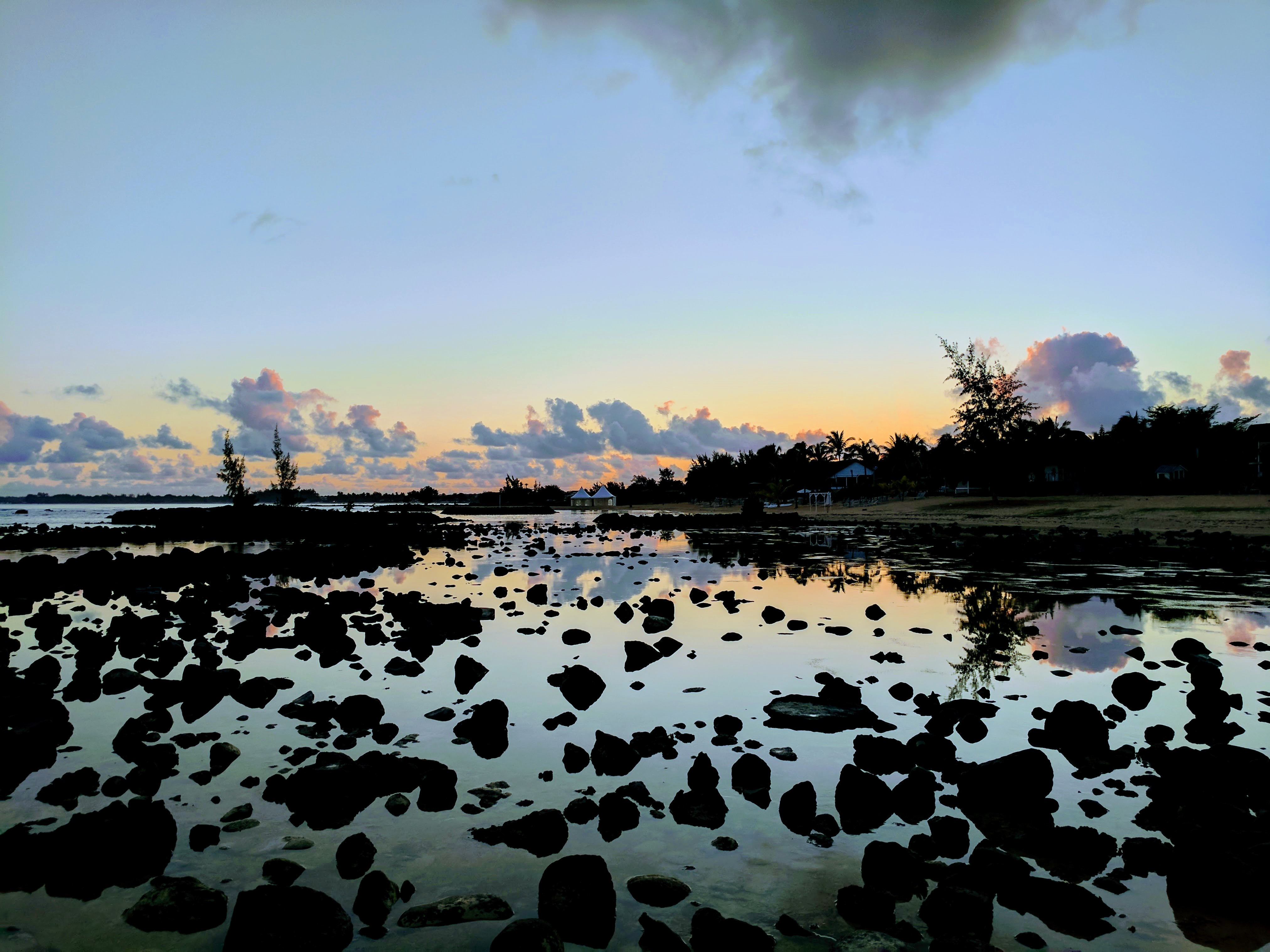 On our last day, my wife insisted that we wake up to see the sunrise. I have faith that it would have happened even without me seeing it, but oh well, we woke up a bit before 6. Only to find out.... that we are on the western side of the island and the sun rises in the east, so we couldn't see anything. But at least we got a nice picture out of it! 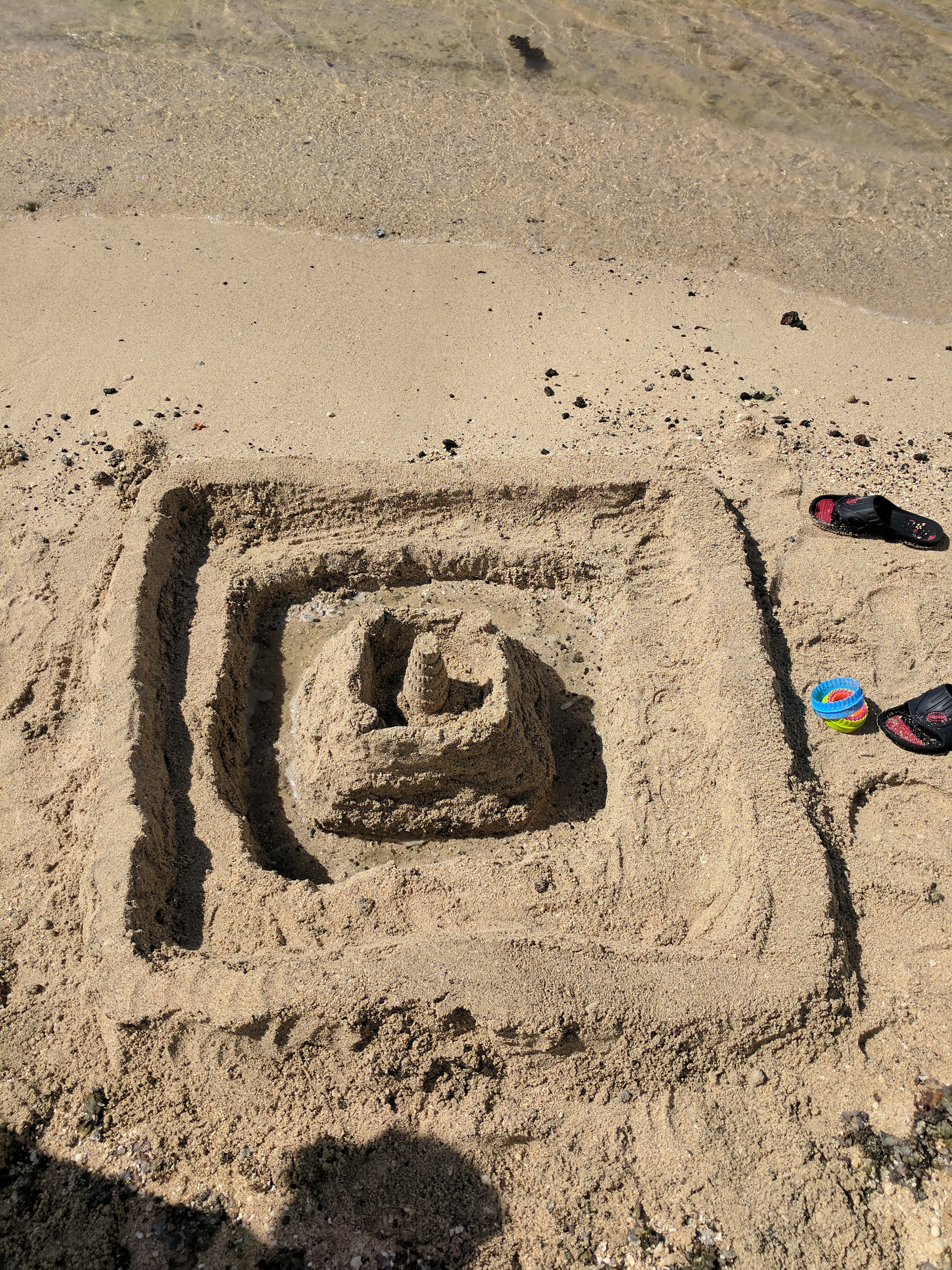 Like with going to the circus, I also wanted to fill another important gap from my childhood: building a sandcastle, which I had never done before. So we bought a small plastic shovel and some cooking molds and on the last day we went to build a sandcastle. One more thing crossed off my childhood list! Success!

Afterwards, we went to the airport. Because I have Gold Status on Turkish Airlines, we went to the business lounge and had a meal. While checking whether boarding of our flight has started, suddenly something in­ter­est­ing showed up, as if it were for the next day. I check on Google. It had said something about a delay, but now it didn't say that anymore. We go to the gate and we are informed.... that the plane won't arrive that night, so we will fly out more the following morning \:D/ Wooohoo! My first cancelled flight, in more than 100 flights! Soooo exciting! (I'm not kidding, finally something to make flying a bit less monotonic). The good side: Turkish Airlines payed for us a reaaaaally fancy hotel room (more like suite with a jacuzzi). The bad side: they screwed up organizing a transport to the hotel so we waited at the airport for more than two hours and the hotel was an hour away, so we ended up sleeping there for like 4 hours only :/ 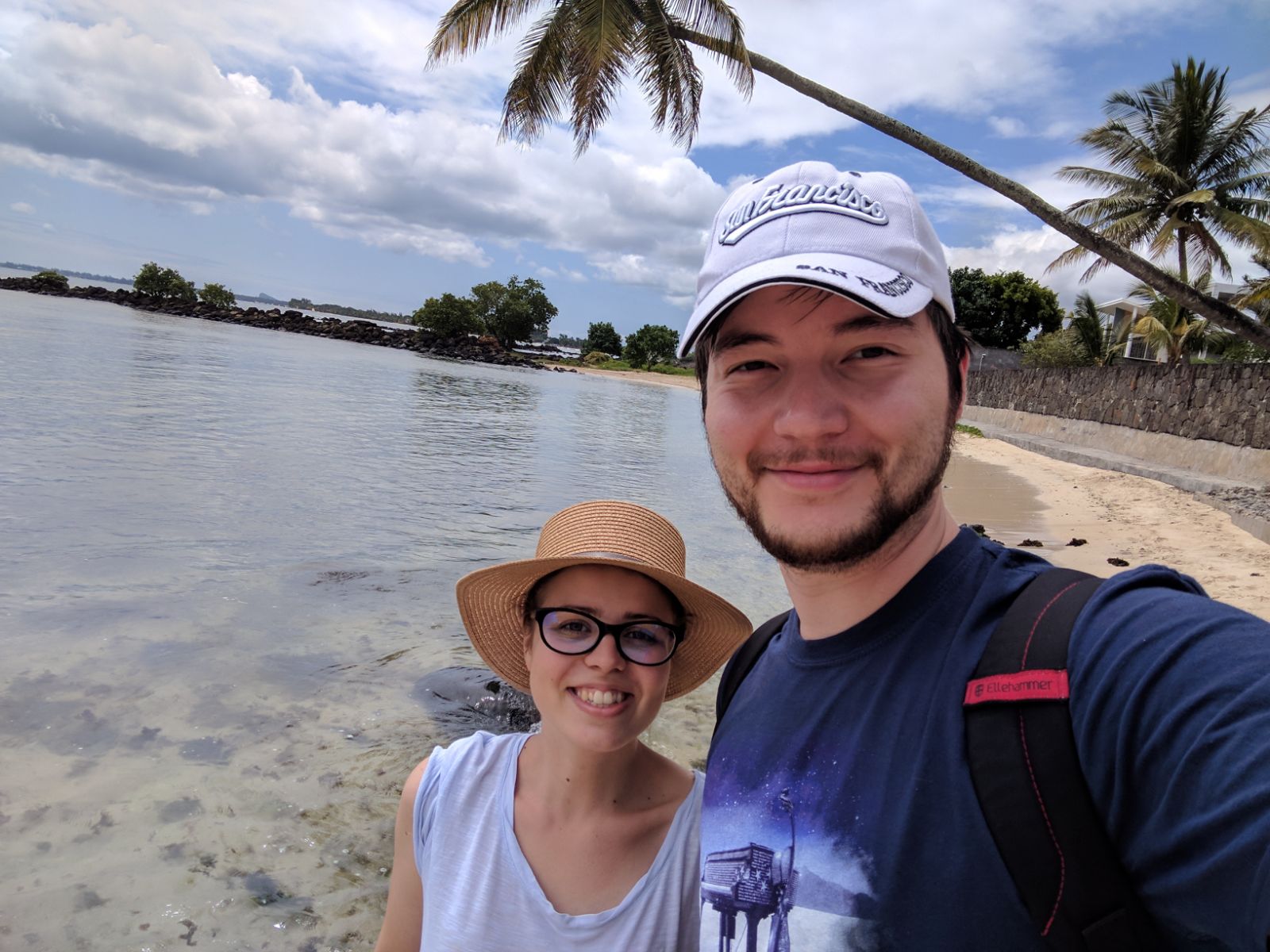 Mauritius was a pleasant surprise for me. I had much lower ex­pec­ta­tions, so it easily surpassed them. It also helped that the tem­per­a­ture was always between 21 and 28 degrees, so it was pretty much always pleasant. That's winter in Mauritius for you!