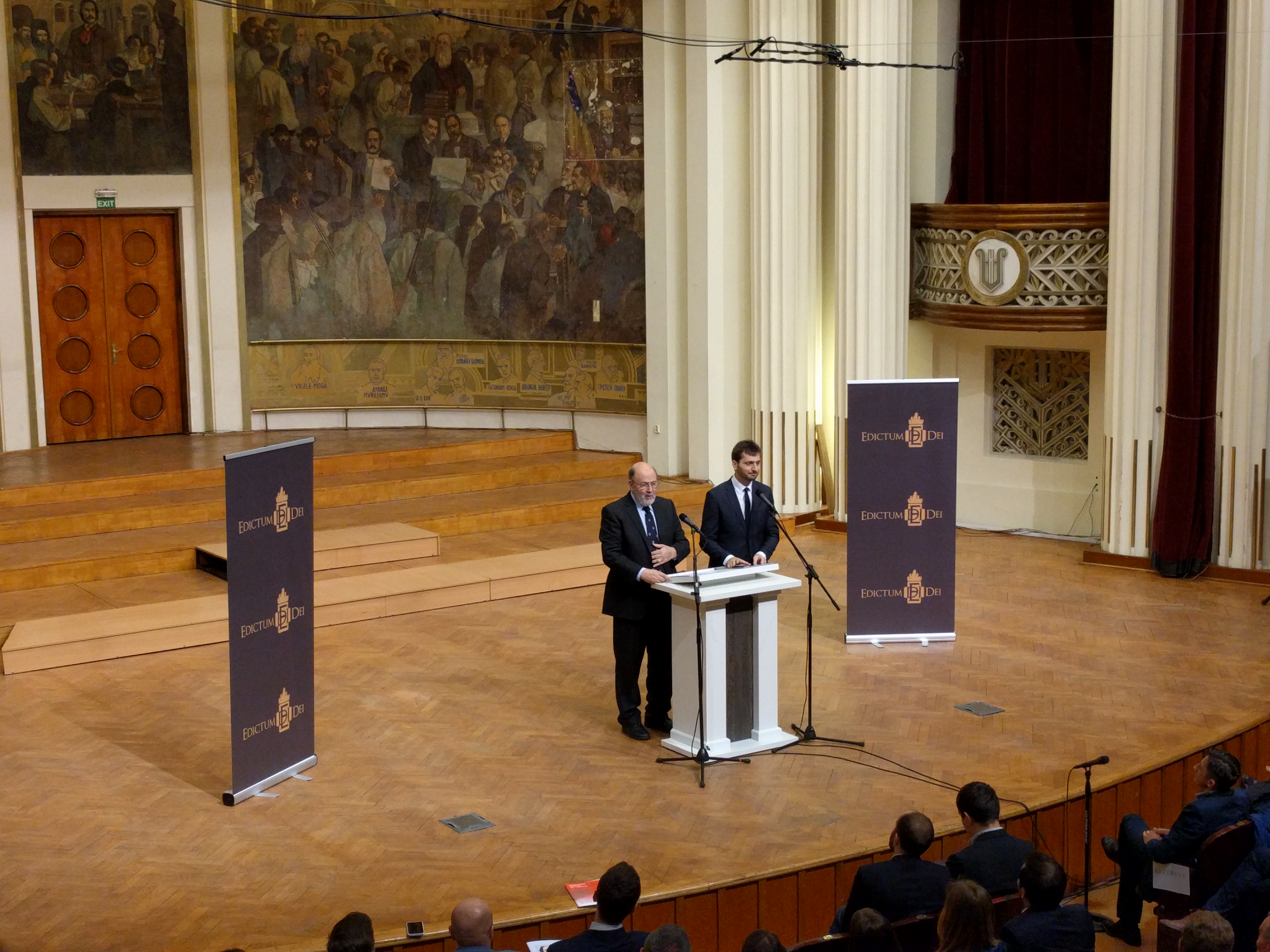 N.T. Wright, one of the world’s leading New Testament scholars and an expert on Pauline theology, was invited by Edictum Dei to hold a conference in Cluj last week. I found out about it the day before, when there were already no more tickets available. But, I persisted, asked around and managed to find some friends who could lend me some, so I went to the first session, out of three.

The first topic was based on his book “The Day the Revolution Began” and in it, the professor explained the meaning and the power of the cross and how today, many people mis­un­der­stand it. You often hear a platonized version of es­cha­tol­ogy, about our souls going to heaven or hell when we die, when Dr. Wright says that in the Bible, the end state is a new creation, with heaven and earth together and God living among his people. He brings back in this way the central message of Jesus Christ in the Gospels: the Kingdom of God as a present reality in the lives of those who believed in Messiah, the Kingdom which will conquer the whole cosmos. Our an­thro­pol­o­gy is often moralized, with Adam and Eve’s dis­obe­di­ence being just a moral failure, instead of a failure to reflect God into creation. And the third mistake we make is paganizing our so­te­ri­ol­o­gy. We believe that the Creator God was very angry with us because we sinned and wanted to kill us all, but then somebody just happened to step in the way. That someone happened to be his only innocent Son, so everything is alright, because the angry creator exhausted his anger on him and everyone else got away free. But, according to Dr. Wright, what’s going on is that God wants to live with his people, but the only way for him to do that is if somebody cleans them from their sins.

Another thing that I found memorable was his ex­pla­na­tion for part of the reason why Galatians was written. He says that one of the main issues there was Jews and Gentiles eating together. Normally, the Gentiles were ritually unclean, so if the two ate together, the Jews would become unclean as well. However, because Jesus died for the Gentiles as well, he cleansed them, so now it was no problem for the two to eat together. And then Dr. Wright goes back to John 12:20, when some Greeks want to talk to Jesus and ask Phillipp for an audience with him. But Jesus doesn’t answer with a time and place to meet them, but seemingly veers off to talk about his death. The ex­pla­na­tion for this is the same: for now, Jesus, as a Jew, could not meet with the Gentiles, but, after he dies, he will have cleaned them, so he is waiting for that.

At the end, I went up to N.T. Wright and I got two autographs, one in his trans­la­tion of the New Testament and one in his book Simply Christian. He noticed that I had a T-Shirt which said δούλος Ἰησοῦ Χριστος (servant of Jesus Christ) and then he told me that one of his grandsons, to whom the book is dedicated, will have his catechism on the 1st of April. He was very nice and friendly :) Un­for­tu­nate­ly, I forgot to take a selfie with him :( 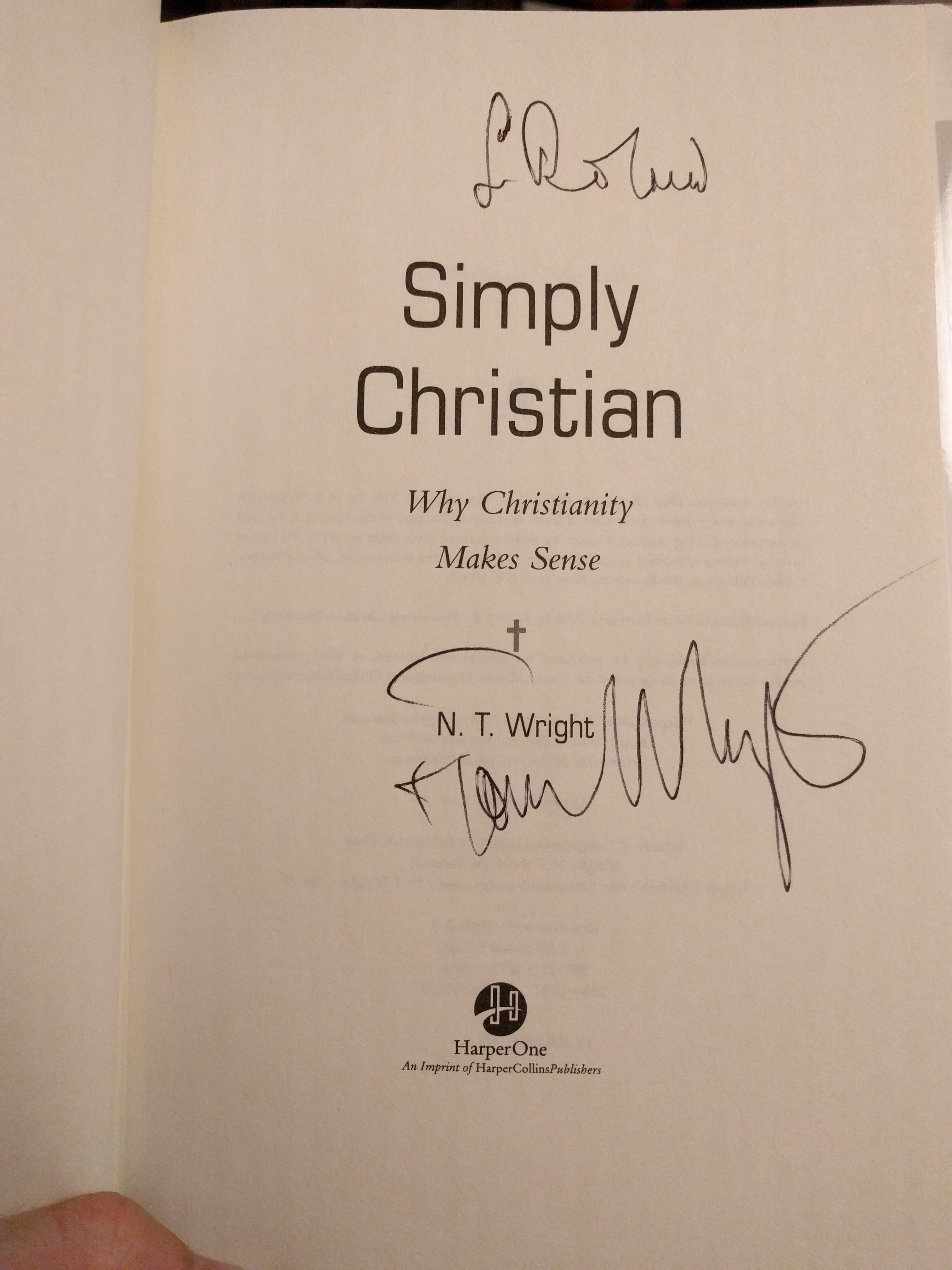