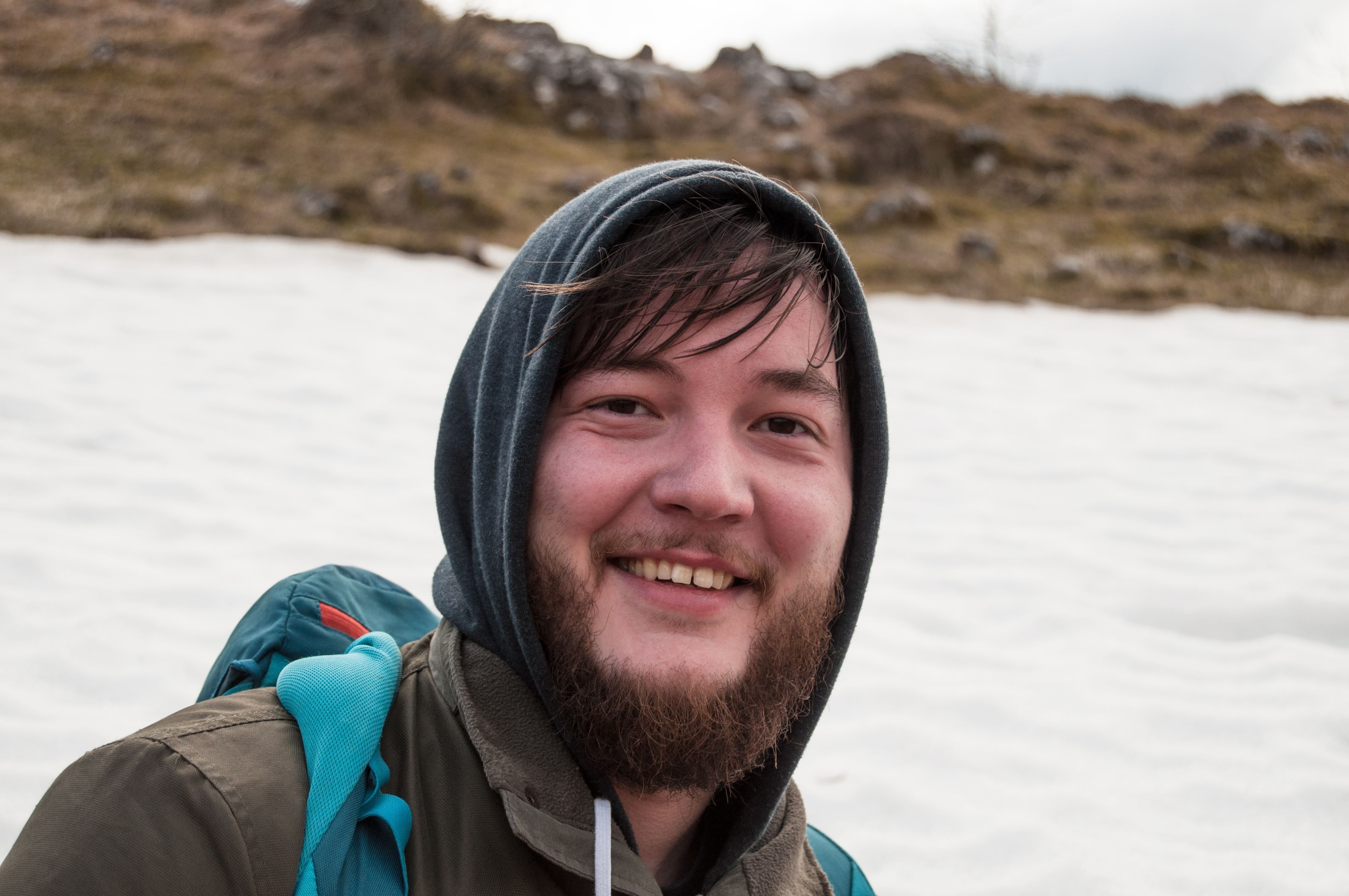 The next target for our hikes was Peștera Bătrânului (Old Man’s Cave)1, which is close to where my parents-in-law live. We knew the cave was closed to tourists, but the views on the way there were supposed to be pretty.

We left on foot on a Saturday morning at 11:00 from Vadu Crișului, on the blue line trail. We passed by the Peștera Caprei (Goat’s Cave), the three Devenț Caves and Poarta Sărutului (Gate of Kissing) The path quickly turned quite steep. Because it had rained until 10:55, the soil was muddy and slippery and I often had to turn on the 4x4 traction (aka use my hands to stop myself from sliding all the way down).

We stopped at one of the Devenț Caves. The cave is at least 150 metres deep. We went in as far as we could, stopping at a big puddle through which we would have had to crawl. Nobody wanted to continue the hike soaking wet, so we went back out. A couple of guys from our group, who had been to the cave before and didn’t want to go in again, made a fire at the entrance of the cave, where we all warmed up a bit.

After almost two hours, we got to the Belvedere Terrace, from where you could see the valley of the Criș River. Another hiker overtook us, together with his pretty, but stinky dog.

Soon afterwards we got to the lapiez2 area, where, to our joy, we found snow in the second week of March! It’s a very hilly area, with lots of small valleys, lots of wind at the top, and in the shaded areas of the valleys there was a fair bit of snow left.

We got to our des­ti­na­tion, learned that there are many species of bats in that cave, we had a late lunch there, took some pictures from outside and then we started going back.

We didn’t take the exact same route back, but took a turn at a fork in the road, to avoid going down where we climbed in the beginning. We had a GPS with us, what could possibly go wrong?

After walking and walking, we realize that this alternate route is actually longer than we expected, so how about we start going down sideways on the mountain, where there is no trail? In the beginning, it looked okay. After 50 metres, less so. After another 100 metres, even worse. We all got down safely, but it was a very slow descent on slippery soil, rocks and fallen tree branches, through the remnants of a mountain creek, which showed signs of washing down trees during sudden downpours. Note to self: stick to the marked trails whenever possible.

Where to next, guys?

Credit for some of the pictures goes to Stefan Mihocas, Ghita Noane and Arva Csabi