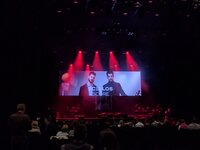 Last weekend was a very “cultured” one for me. On Friday evening I went to a 2Cellos concert. And boy, did that concert rock. For those who don’t know them, 2Cellos is made by two cello players who take modern songs and adapt them for the cello. They play a large variety of songs, from Michael Jackson’s Smooth Criminal (their debut hit), to movie sound­tracks (Gladiator or Inception), to rock songs (such as Thun­der­struck) to mellow songs such as U2’s With or without you (aka the trailer song from Downton Abbey season 2).

To some extent, they remind me of the Piano Guys, to whose concert I …continue.