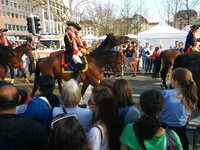 There is a huge parade, in which the 39 guilds from Zurich take part. They dress up in …continue.