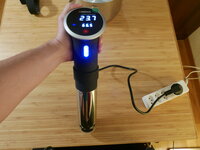 Last year I bought an Anova Sous Vide Cooker. The name is slightly misleading, because it's not generally used to cook in a vacuum, but for cooking at very precisely controlled tem­per­a­tures.

The advantage of using Anova is that you can cook various foods at tem­per­a­tures below 100 degrees, for several hours. This way, you can avoid the degra­da­tion of certain proteins. For example, egg white starts to become solid at around 65 degrees, while the yolk at 70. If you cook the egg at just 65 for half an hour, you can get a perfect soft boiled egg, with really runny yolk, while the white is solid. …continue.